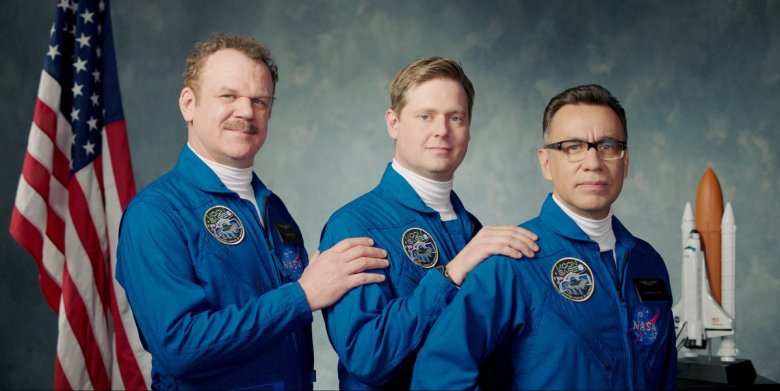 Moonbase 8 is coming to Showtime. The cable channel has ordered the new comedy series which focuses on astronauts. John C. Reilly, Tim Heidecker, and Fred Armisen star in this new series. A release date has not been announced.

“SHOWTIME has picked up MOONBASE 8, a new half-hour comedy series from A24 set to debut this fall. Starring Emmy® nominee Fred Armisen (Portlandia), Tim Heidecker (Tim and Eric Awesome Show, Great Job!) and Golden Globe® and Academy Award® nominee John C. Reilly (Walk Hard: The Dewey Cox Story), the six-episode series is a workplace comedy that follows three subpar astronauts living at NASA’s Moon Base Simulator with high hopes of being chosen to travel to the moon. Created, written and executive produced by Armisen, Heidecker, Reilly and Emmy nominee Jonathan Krisel (Baskets), who also serves as series director, MOONBASE 8 is produced by A24 and Abso Lutely Productions. The announcement was made today by Jana Winograde, President of Entertainment, Showtime Networks Inc.

“In a year when we have all been forced to come to terms with life in close quarters, we are happy to have landed this offbeat take on life in captivity with dreams of escaping to something grander,” said Winograde. “While the show was produced before the pandemic, its subject matter is timely – and thanks to Fred, Tim, John and Jonathan, its humor is timeless.”

Set in the isolated desert of Winslow, Arizona at NASA’s Moon Base Simulator, MOONBASE 8 follows eager astronauts Skip (Armisen), Rook (Heidecker) and their leader Cap (Reilly) as they attempt to qualify for their first lunar mission. While working vigorously to complete their training, a series of unexpected circumstances forces the astronauts to question their own mental sanity, trust in each other and whether or not they’re cut out for space travel.”

What do you think? Will you check out Moonbase 8 on Showtime? Are you a fan of these comic actors?

Really hoping he will make a new season of “Check It Out”. It is his magnum opus if you ask me.
In my opinion he is funnier than Will Ferrell, and can do other types of acting where Will is a one trick pony.