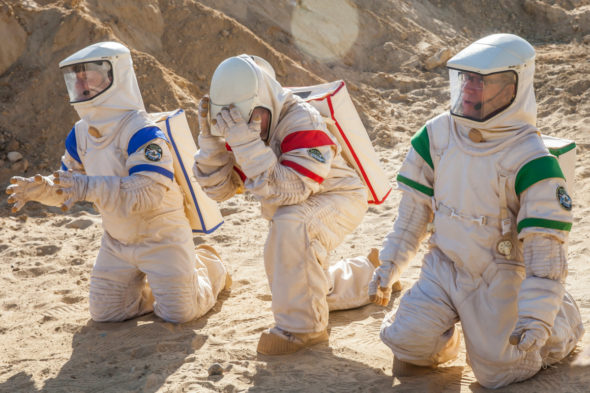 The Moonbase 8 series comes from some well-known names in comedy but, how well will it be received? Will this Showtime series be a hit that runs for many years or, will it be cancelled and not even reach a second season? Do the ratings even matter since the entire season has already been released digitally? Stay tuned.

An astronaut comedy series, the Moonbase 8 TV show stars Fred Armisen, Tim Heidecker, and John C. Reilly. Set in the isolated desert of Winslow, Arizona at NASA’s Moon Base Simulator, this series follows eager (though subpar) astronauts. Doctor Michael “Skip” Henai (Armisen) is the son of an astronaut. Professor Scott “Rook” Sloan (Heidecker) is a Christian who wants to spread the Gospel of Jesus Christ in space. Their leader is Robert “Cap” Caputo (Reilly), a former helicopter pilot and supposed military veteran. As these astronauts attempt to qualify for their first lunar mission, they work vigorously to complete their training. A series of unexpected circumstances force the astronauts to question their own mental sanity, trust in each other, and whether or not they’re cut out for space travel.

What do you think? Do you like the Moonbase 8 TV series on Showtime? Should it be cancelled or renewed for a second season?