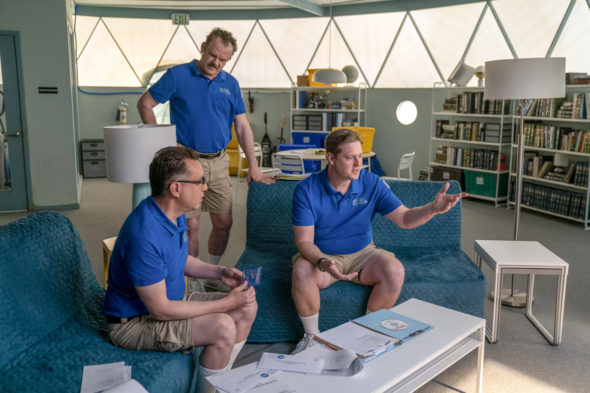 Can this team get off the launchpad? Has the Moonbase 8 TV show been cancelled or renewed for a second season on Showtime? The television vulture is watching all the latest cancellation and renewal news, so this page is the place to track the status of Moonbase 8, season two. Bookmark it, or subscribe for the latest updates. Remember, the television vulture is watching your shows. Are you?

Airing on the Showtime cable channel, the Moonbase 8 comedy TV show stars Fred Armisen, Tim Heidecker, and John C. Reilly. Set in the isolated desert of Winslow, Arizona at NASA’s Moon Base Simulator, this series follows eager (though subpar) astronauts. Doctor Michael “Skip” Henai (Armisen) is the son of an astronaut. Professor Scott “Rook” Sloan (Heidecker) is a Christian who wants to spread the Gospel of Jesus Christ in space. Their leader is Robert “Cap” Caputo (Reilly), a former helicopter pilot and supposed military veteran. As these astronauts attempt to qualify for their first lunar mission, they work vigorously to complete their training. A series of unexpected circumstances force the astronauts to question their own mental sanity, trust in each other, and whether or not they’re cut out for space travel.

The first season of Moonbase 8 averaged a 0.01 rating in the 18-49 demographic and 81,000 viewers. Find out how Moonbase 8 stacks up against other Showtime TV shows.

Will Showtime cancel or renew Moonbase 8 for season two? Despite the names behind the show, the ratings are very, very low for this comedy series. It’s worth noting however that the entire season was released digitally ahead of the linear launch. Since Showtime isn’t ad-supported, they just have to keep their viewers happy. Moonbase 8 seems to fit in with Showtime’s brand so, I think it will be renewed. I’ll update this page with breaking developments. Subscribe for free alerts on Moonbase 8 cancellation or renewal news.

What do you think? Do you hope the Moonbase 8 TV show will be renewed for a second season? How would you feel if Showtime cancelled this TV series, instead?

Yes I hope Moon Base 8 gets renewed for 2nd season. I love Reilly

I like it, it reminds me of other projects these 3 have been in. I would watch more.

Probably the worst stupidest show I have ever seen. Showtime should be ashamed for even releasing this garbage. I normally am a huge fan of nearly all Or showtimes shows but this should be immediately cancelled and air no more episodes to save face!!

Moonbase 8 is dumb! John C Reilly needs to finally grow up, like the rest of the adults around him.