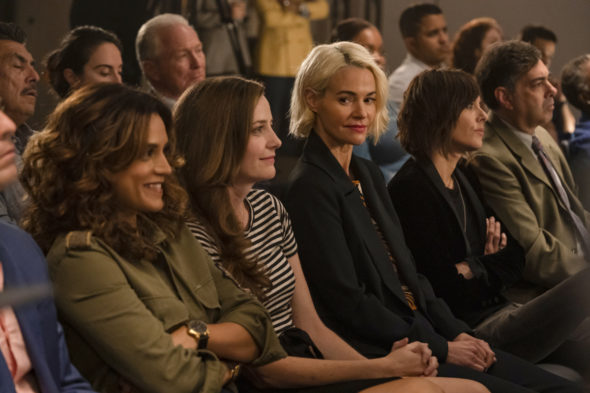 Can this sequel recapture the magic of the original? Has The L Word: Generation Q TV show been cancelled or renewed for a second season on Showtime? The television vulture is watching all the latest cancellation and renewal news, so this page is the place to track the status of The L Word: Generation Q, season two. Bookmark it, or subscribe for the latest updates. Remember, the television vulture is watching your shows. Are you?

Will Showtime cancel or renew The L Word: Generation Q for season two? While I don’t expect this sequel to score big ratings, at this point, I suspect that it will still score a renewal. I’ll keep an eye out for news and will update this page with breaking developments. Subscribe for free alerts on The L Word: Generation Q cancellation or renewal news.

1/13/20 update: Showtime has renewed The L Word: Generation Q for a second season.

What do you think? Are you glad that The L Word: Generation Q TV show has been renewed for a second season? How would you feel if Showtime had cancelled this TV series, instead?

I totally enjoyed the New L word. All the acting was awesome and I can hardly wait for the next seasonn

I wasn’t very happy with the new L word at first..but after seeing it getting better and better..i wouldn’t be very happy if they cancelled it again..I can’t wait for Season 2. Hope it get here sooner then later.

I so hope we get a second season and some cast members from the original hint hint Carmen, Tina, Helena, Max

I really love L Word Gen Q. I simply cannot wait for Sunday to come around so I can see the next episode! I watch the replays on Showtime throughout the week. I would be absolutely devastated if GenQ was not renewed for Season Two.