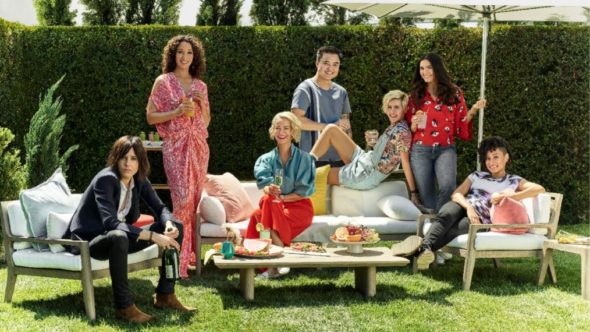 TV show description:
A dramatic series on Showtime, The L Word: Generation Q is a sequel to The L Word TV show which ran on the same channel from 2004-2009.

Dani is a powerful and calculating PR executive whose ambition is only tested by her conscience. Micah is an earnest, soft-spoken adjunct professor who is forced to confront his fear of vulnerability.

Meanwhile, Sarah “Finley” is a charming but unfocused assistant who struggles to reconcile her sexual orientation with her religious upbringing. Sophie is a TV producer who guards her heart and is quick to put other people’s needs before her own.

What do you think? Do you like The L Word: Generation Q TV show? Do you think it should be cancelled or renewed for another season?

Want the show renewed. I believe low ratings for some episodes may have been due to a few things, such as:poor writing, MLR inconsistensies with her approach or attitude towards story lines/production, etc. During a recent interview implied show bias towards white as she was white/had wrong age numbers for a potential character/said she was responsible for making a former show actor “making it” because of being on the show when it was other way around. Said cast member already had established career. MLR’s answers to questions were head scratchers. This show as a lot of fans worldwide. Show needs… Read more »

yes i agree with you mlr has ruined it totally theres no chance of it getting a 4th series and i would be very suprised if it did mlr basically told her coming out story and her perception of wat its like to be gay and for her to be married to a woman is unbelievable it just goes against the grains of her as a producer as she cannot go beyond seeing outside the surface of her own marriage etc. this show should have be an epic story for tibette fans alike and now that sepi jenn and laurel… Read more »

L Word Generation Q should be renewed. I recently re-watched the original 6 seasons and watch again the 2 of Generation Q following the original. I was able to remember and tie it all together. I enjoy all their lives and what they go through. Please renew!

L Word Generation Q must be renewed! Low ratings are probably due to the lack of advertising on Showtime. I had to search and search to find the listing, whereas advertisements for Dexter (another good show) has been popping up for months on end on the Showtime Hub.

I watched the original and felt empty when it came to a close. I am so happy for the reboot as our lives are changing. I am an old lesbian and having some of original cast shows friendships and relationships, that live on forever is so warm an fuzzy

There must be Season3 and 4 and 5 and so on and so forth. The show is very good…the friendship, the love, the representation, the struggles. We can all relate and it brings us hope.

We defo need more seasons after number 2 … the cast are fantastic and the OG gals just finish it all off spectacularly. I love this show, the love and friendships are good for the soul 🙂 x

Yes – big fan of the OG gals in Next Gen as well as the new characters. The show does a great job of blending the “generations”. Cannot say enough about the acting of Jennifer Beals, Leisha Hailey & Katherine Moennig. They are fantastic.
Would love to see Tina’s character return as often as possible. The chemistry between Bette & Tina is spell binding!

I didnt even know about it until my wife told me a co-worker told her. We were both excited. We are so amped I love it so much. It still is just as good. I hope they have more seasons. I was bummed there were only 8 episodes in the season. We were hoping there were like 11+, however I couldn’t be happier it’s back on.

its been renewed for a series 2 jana