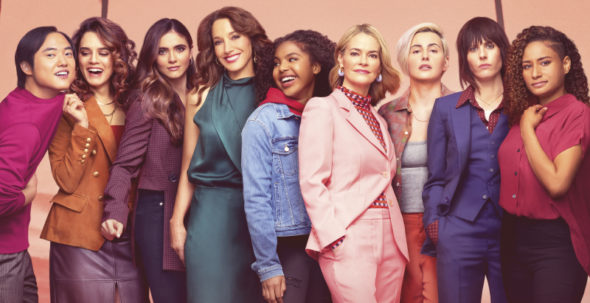 The original L Word series ran for six seasons on Showtime but the world has changed quite a bit in the decade that’s followed. How long will this new iteration last? Will The L Word: Generation Q be cancelled or renewed for season three? Stay tuned.  *Status Update Below.

For comparisons: Season one of The L Word: Generation Q on Showtime averaged a 0.05 rating in the 18-49 demographic and 224,000 viewers in the live+same day ratings.

What do you think? Do you like the The L Word: Generation Q TV series on Showtime? Should it be cancelled or renewed for a third season?

*2/5/22 update: The L Word: Generation Q has been renewed for a third season on Showtime.

I watched the original series and just finished bing-watching Generation Q. This is an excellent show and I hope to be watching S3 in the not too distant future.

i agree ann the ogs will always be top for me

The finale was overall weak, but the finale’s ratings making the jump it did, I would give this series another year. But the obvious question is, will the showrunner of this series finally stick to what works and what brings this series the most buzz (Gini & Tibette) or will she continue doing what she does which is stupidly stick with what doesn’t work? (Too much Sophie & Finley)

i agree it only jumped coz of tina/laurel

If Showtime cancels show , I wouldn’t watch showtime anymore . More people watch than what those ratings show. A lot of people have gathering and parties on day of show . Hope it renews

I love this show. If it was cancel it will break my heart. The show brings the old with the new. With the pandemic it has gotten the credit it deserves. I say give a chance. Bring season 3

I stream everything; I’d hate to see it canceled. I only pay for showtime to watch this series. Maybe it’s not the money make you’re looking for but it has huge potential!

I watched it from the beginning, Iam suprised that ratings r not well! What else is like this, I find it’s comical, real and the act from there heart. Gay or not, these actors r awesome. TY

the fanbase is tibette if tibette doesent happen the fans leave

Come on, nothing like this on tv., watched the original.these ladies are so under rated , keep it onTY

Y’all really need a better writing team. Y’all have the lesbian community looking really dysfunctional and messy like we have no gravitas to our relationships and all we do is have sex. Also the only reason I’m still tuning in is for Gigi and Dani other than that stick a fork in it with this show. There’s just so much wrong with these characters storylines that don’t connect. I’m sad y’all really ruined this for us. But it is what it is. And whoever bright idea it was to bring back cherie jaffe instead of Carmen. Fire them! that really… Read more »

A grave mistake of judgement to have the iconic couple (Bette Porter and Tina Kennard) separated as the start off point of Gen Q. It was the straw that broke the young camel’s back.

well said we all feel the same

I don’t see how anyone that watches this series is surprised by it’s low ratings. The series and the characters are boring. So boring even the 3 original characters that they brought back, that were always so fun & interesting to watch on the original show, are boring on this reboot.

message for the producers, not only me thinks G Q is lesbophobic bs, look at the ratings, no one wants this, you took over an iconic show and destroyed it with this hyperwoke ridiculous boredom

Please renew this show….it is so well done and is important for the LGBTQ community.