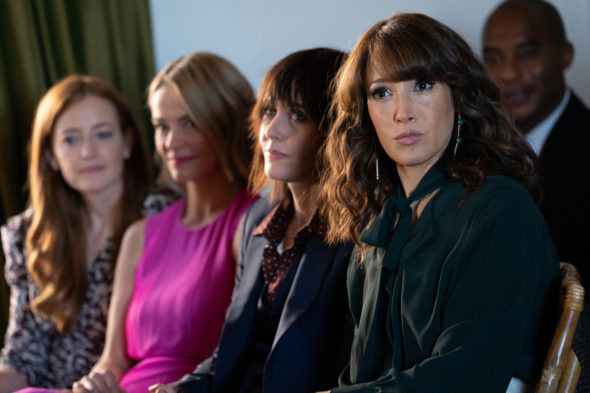 Airing on Sunday and Monday nights, the second season of The L Word: Generation Q averages a 0.01 rating in the 18-49 demographic and 80,000 viewers in the live+same day ratings (includes all DVR playback through 3:00 AM). Compared to season one, that’s down by 74% in the demo and down by 64% in viewership in the live+same day ratings (including DVR playback through 3:00 AM).  It’s unknown how the season performed in delayed viewing and streaming but, given the small traditional ratings, it seems likely that they helped get this show renewed.

In season two, Bette (Beals) dealt with Tina (guest star Laurel Holloman) and Carrie’s (guest star Rosie O’Donnell) engagement, and daughter Angie’s (Hull) search for her birth father; Shane (Moennig) ramped up her business and her feelings for Tess (Jamie Clayton); and hot new author Alice (Hailey) wrestled with her own complicated feelings for her book editor. Meanwhile, a newly single Dani (Mandi) leaned on Gigi (Moafi) during her father’s trial; Finley (Toboni) and Sophie (Zayas) tried hard to make it work despite Finley’s spiraling addiction; and friends Micah (Sheng) and Maribel (Jillian Mercado) fell hard for each other. What results of all these complex affairs of life and love will be revealed in season three.

Check out our status sheets to track new TV series pickups, renewals, and cancellations. You can find lists of cancelled shows here.
What do you think? Have you watched The L Word: Generation Q on Showtime? Are you glad to hear that this drama has been renewed for a third season?

SO GLAD that The L Word was renewed for a third season.
I’m a guy man and I LOVE this show!
I LOVED the original as well.

I agree with you ! Can’t wait for more. Hopefully we can get many more seasons!

Ecstatic to hear this news!