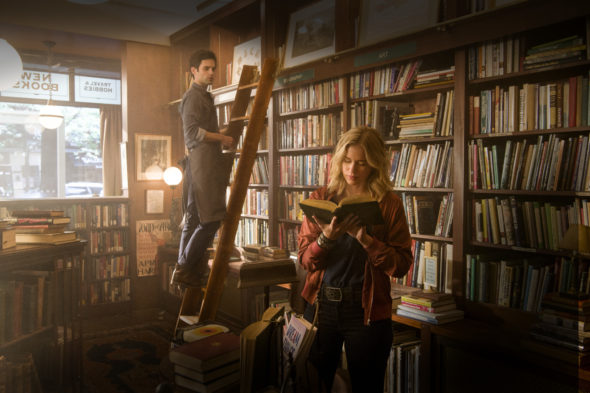 TV show description:
Based on the Caroline Kepnes novel of the same name, the You TV show comes from creators Greg Berlanti and Sera Gamble. Although the network bills it as a 21 Century love story, this thriller is truly a twisted tale of frightful fixation.

Unfolding in New York City, the psychological drama centers on bookstore manager Joe Goldberg (Badgley) and aspiring writer and grad student Guinevere Beck (Lail). Beck, as she likes to be called, is struggling with a heavy work and course-load. Unfortunately, her friends are not even much emotional help, since they don’t seem to get or support her. She also can’t shake her boyfriend of sorts, Benji (Pucci), who treats her somewhere between a booty-call and an afterthought.

Meanwhile, Joe appears to be bright and compassionate, with a keen eye for detail. When he meets Beck, he is instantly smitten and searches for more about her online. Despite the fact that he looks out for a neglected neighborhood boy, Paco (Padovan), as Joe narrates the pilot, it soon becomes clear that this seemingly caring romantic is a dark soul prone to obsession and violence.

Were someone to ask Joe, “What would you do for love?” his answer could well be murder. There is little risk of blaming his stalking on some lack of confidence, since it escalates quickly to alarming levels.

He engages in voyeurism and even enters Beck’s apartment under false pretenses. By the time Joe gains access to her electronic devices, Beck is in too deep, even though she has spent but minutes chatting to him at the bookshop.

Joe will have Beck at all costs. To that end, he sets out to remove everything — and everyone — standing in his way.

What do you think? Do you like the You TV series? Should this TV show be cancelled or renewed for another season?

Great show and should NOT be canceled. Love it!!

Such an awesome show!! Keeps me hanging from week to week!! Everyone including radio hosts watch it and talk about it. Please bring it back!!!