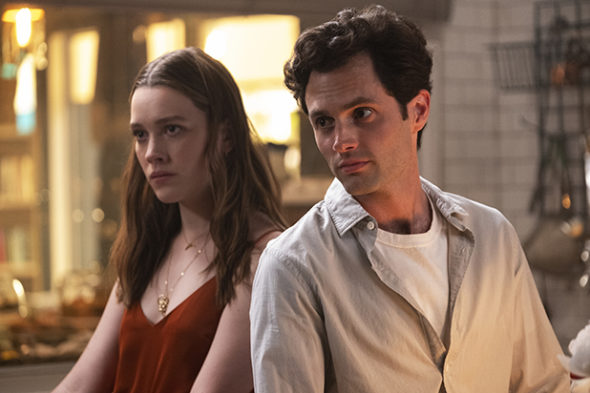 Joe Goldberg is coming back for more. Netflix has renewed the You TV series for a third season of 10 episodes. Season three is expected to debut in 2021.

Streaming on the Netflix subscription service, season two of You stars Penn Badgley, Victoria Pedretti, Jenna Ortega, Janes Scully, Ambyr Childers, and Carmela Zumbado. Based on the Caroline Kepnes novel of the same name, the drama centers on NYC bookstore manager Joe Goldberg (Badgley) who became infatuated with aspiring writer and grad student Guinevere Beck (Elizabeth Lail). Season two finds Goldberg on the run from the horrors of his past. He settles in Los Angeles as “Will Bettelheim” and falls for Love Quinn (Pedretti), an aspiring chef and health guru. Can Goldberg truly escape his past or will history repeat itself?

Badgley and Pedretti are set to return for season three. Additional casting will be announced at a later date. You’s co-creators, Sera Gamble and Greg Berlanti, will return as executive producers and Gamble will once again be the showrunner.

This will be the show’s second season that was created as a Netflix original. You began as a Lifetime series but the cable channel cancelled it after the first season.

See you soon, neighbor. YOU S3 is coming. pic.twitter.com/rCJx7K9v0P

What do you think? Do you like the You TV series? Are you looking forward to watching season three?

WHy is my brooklyn nine nine not on Netflix

I love these series of you and please make season 3 ❤️. I want to know what happened to the couple and what they get there self into.

Yes. Can’t wait for Season 3. Two psychos are even better than one.