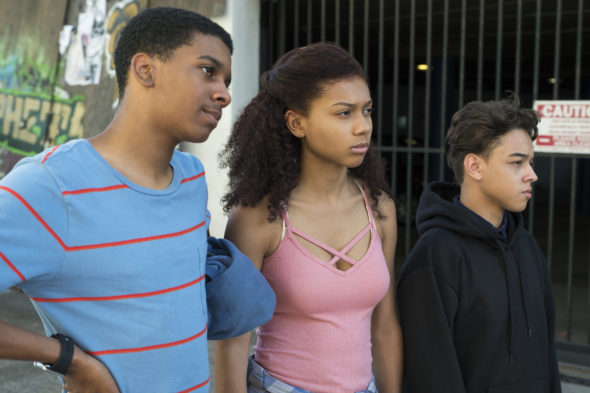 What’s new in the neighborhood? Has the On My Block TV show been cancelled or renewed for a second season on Netflix? The television vulture is watching all the latest TV cancellation and renewal news, so this page is the place to track the status of On My Block, season two. Bookmark it, or subscribe for the latest updates. Remember, the television vulture is watching your shows. Are you?

Unless they decide to publicize viewership statistics, it is difficult to predict whether Netflix will cancel or renew On My Block for season two. I don’t have a strong feeling about this one either way, but flying blind, I think it will snag a second season renewal. For now, I’ll keep an eye on the trades and update this page with breaking developments. Subscribe for free On My Block cancellation or renewal alerts.

4/13/2018 update: On My Block has been renewed for a second season on Netflix. Details here.

What do you think? Did you think the On My Block TV show would be renewed for season two? How would you feel if Netflix had cancelled this TV series, instead?

I wish they could bring it back as soon as possible, but it is already guaranteed that if they renew the series, it will at least take 8 to 10 months

I think that they will have a season 2 no doubt, the part that makes me mad is the fact that netflix takes so long to renew a series and add a season, for example, iron fist season 1 ended in July 2017 and there now just getting a new season. Sometimes it might take even up to a year for netflix to add a season to a series.

Loved it please bring it back asap

SEASON 2 PLEASE. NO WAY YOU CAN LEAVE IT AT THAT ENDING!

Please don’t cancel this show it’s one of the best shows on Netflix.I couldn’t stop watching it and I was mad when I couldn’t watch season two.

I couldn’t not stop watching!! No for real currently it is 6:04 AM… I just hope and pray that the show doesn’t get canceled like “The Get Down” I LOVED that show and now I LOVE “On My Block”.

I loved it so freaking much it is a great show please pleasssseee make a season 2 I need to know what happens next.lol

This is a very good show I just watched it all go in sitting can not wait for the next session. A must see