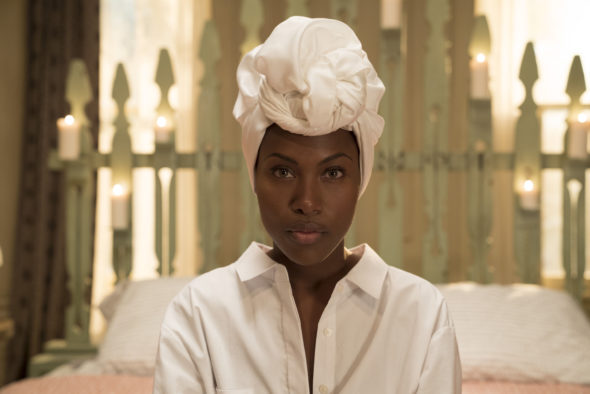 What’s new with Nola Darling? Has the She’s Gotta Have It TV show been cancelled or renewed for a second season on Netflix? The television vulture is watching all the latest TV cancellation and renewal news, so this page is the place to track the status of She’s Gotta Have It, season two. Bookmark it, or subscribe for the latest updates. Remember, the television vulture is watching your shows. Are you?

Streaming on the Netflix paid subscription platform, She’s Gotta Have It stars DeWanda Wise, Lyriq Bent, Cleo Anthony, Ilfenesh Hadera, Margot Bingham, Anthony Ramos, Indigo Hubbard Salk, Pauletta Washington, Sydney Morton, and Brandon Niederauer. Set in the Fort Greene Neighborhood of Brooklyn, New York, the comedy-drama centers on Nola Darling (Wise), a modern black woman in her late 20s. Complex, forward-looking, and passionate, this beautiful maverick lives and loves on her own terms. Both polyamorous and pansexual, since Nola wants it all, yet can’t get everything from one man, she refuses to settle. Enter Jamie (Bent), Greer (Anthony), and Mars (Ramos). Possessed of big appetites and an unquenchable spirit, Nola is full of love for her family, her friends, her lovers, her art, her neighborhood, and even herself.

Since ad revenue doesn’t figure in, unless they decide to publicize viewer statistics, it is hard to predict whether Netflix will cancel or renew She’s Gotta Have It for season two. While Netflix needs to attract and retain paying subscribers, they also need to cultivate relationships with creators and producers. Because of that, I suspect this Spike Lee creation will score a second season on the streaming service. Still, that’s just speculation, so I’ll keep an eye on the trades and update this page with breaking developments. Subscribe for free alerts about She’s Gotta Have It cancellation or renewal news.

Update: Netflix has renewed She’s Gotta Have It for a second season.

What do you think? Are you glad that the She’s Gotta Have It TV show has been renewed for a second season? How would you feel if Netflix had cancelled this TV series, instead?

Just watched the first season and it I am excited for the second season. Best season I’ve seen yet!!

One of the best pieces of art I have ever experienced. Please renew. Spike is so perpetually on the mark.

I hope they renew this! Just finished watching the series.