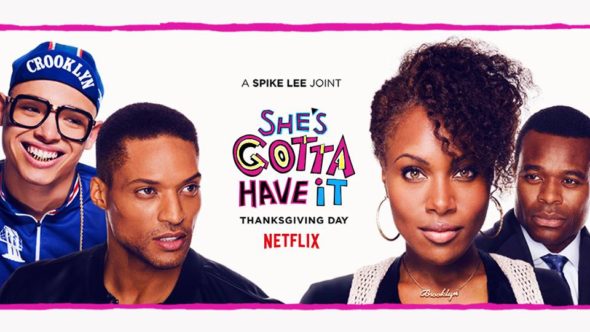 TV show description:
Created by Spike Lee and Tonya Lewis Lee, the She’s Gotta Have it TV show is a current-day television adaptation of Spike Lee’s 1986 feature film of the same name. Set in the Fort Greene neighborhood of Brooklyn, New York, the comedy-drama centers on Nola Darling (Wise).

Nola is a modern black woman in her late 20s. Complex, forward-looking, and passionate, this beautiful maverick lives and loves on her own terms. As she is averse to labels, don’t even think about calling her a freak.

Both polyamorous and pansexual, since Nola wants it all, yet can’t get everything from one man, she refuses to settle. Enter Jamie (Bent), Greer (Anthony), and Mars (Ramos).

Even though he’s married and a father, to Nola, investment banker Jamie Overstreet is the personification of stability. Where she is a breath of fresh air who gets him to loosen up, Jamie inspires her to look at things more deeply. He also provides financial backing for her artistic endeavors.

Meanwhile, Nola’s relationship with photographer Greer Childs is founded on the pleasure principle. Aside from their physical compatibility, Greer and Nola share a dynamism, as well as a distaste for other people’s judgment.

Next, there’s Mars Blackmon, “Da Original B-Boy Sneakerhead.” Because they’re from the same neighborhood, Nola can be her unfiltered self around Mars, and together they share a lot of laughs.

In some ways though, it is single mother Opal Gilstrap (Hadera) who gets Nola in a way her male lovers cannot. Earthy and sensitive, Opal understands how sometimes a young woman just needs to feel free.

Possessed of big appetites and an unquenchable spirit, Nola is trying to figure out her professional life, her personal life and what she wants from the world. Whatever that may be, Nola Darling is full of love for her family, her friends, her lovers, her art, her neighborhood, and even herself.

What do you think? Do you like the She’s Gotta Have it TV series? Should this TV show have been cancelled or renewed for a third season on Netflix?

This show is awesome! Please renew fir a third season!

I loved this show I really hope there is a season 2!!!