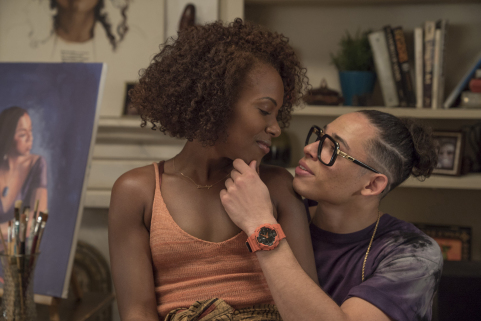 Based on Lee’s 1986 film, the comedy-drama centers on “Nola Darling (DeWanda Wise), a Brooklyn-based sexually liberated, free-spirited painter/mixed media artist in her late 20s struggling to define herself and divide her time amongst her friends, her job and her three lovers.” The cast also includes Anthony Ramos, Cleo Anthony, Lyriq Bent, Sydney Morton, and Kim Director.

She’s Gotta Have It premieres on Netflix on November 23rd.

The seriously sexy comedy stars breakout actress DeWanda Wise as Nola Darling, an uncompromising woman in her late twenties struggling to define herself and divide her time among her Friends, her Job and her Three Lovers: The Cultured Model, Greer Childs, The Protective Investment Banker, Jamie Overstreet and Da Original B-Boy Sneakerhead, Mars Blackmon. Nola is not who you want her to be. Nola is now – she is outspoken, complicated, progressive, unapologetic, passionate, sexual.. Spike Lee directs all 10 episodes of the series, he created and produced the show. Tonya Lewis Lee is Executive Producer. Barry Michael Cooper and Lynn Nottage are also Producers. She’s Gotta Have It was SPIKE’s landmark film which he shot in 12 days during the long hot summer of 1986. The film signaled a change of how African Americans are portrayed in movies. The new She’s Gotta Have It is his first TV series.”

What do you think? Are you a fan of the movie She’s Gotta Have It? Will you watch the Netflix series?