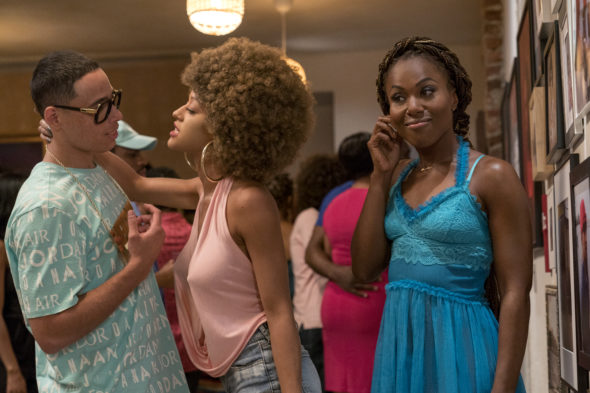 Is Nola Darling still making the most of life? Has the She’s Gotta Have It TV show been cancelled or renewed for a third season on Netflix? The television vulture is watching all the latest TV cancellation and renewal news, so this page is the place to track the status of She’s Gotta Have It, season three. Bookmark it, or subscribe for the latest updates. Remember, the television vulture is watching your shows. Are you?

A Netflix comedy, She’s Gotta Have It stars DeWanda Wise, Lyriq Bent, Cleo Anthony, Ilfenesh Hadera, Margot Bingham, Anthony Ramos, Chyna Layne, and Fat Joe. Set in the Fort Greene Neighborhood of Brooklyn, New York, the comedy-drama centers on Nola Darling (Wise), a modern black woman, full of love for her family, her friends, her lovers, her art, her neighborhood, and even herself.

Unless they decide to publicize viewer statistics, it is hard to predict whether Netflix will cancel or renew She’s Gotta Have It for season three. While the streaming service will often give a series a second season to find its audience, not too many shows go past a third. Generally speaking, good news from Netflix comes quickly, so a renewal is likely to come sooner rather than later. Although there was a long time between the first two installments of this series, waiting for a pickup didn’t play into that delay. It originally debuted on November 23, 2017 and the renewal was announced on January 1, 2018. While we wait, I’ll keep an eye on the trades and press releases, and update this page with any developments, so subscribe for free alerts about She’s Gotta Have It cancellation or renewal news.

7/18/19 update: Netflix has cancelled the She’s Gotta Have It TV show after two seasons.

What do you think? Were you hoping that the She’s Gotta Have It TV show would be renewed for a third season? Are you sorry that Netflix cancelled this TV series, instead?

Definitely looking forward to season 3. This series is refreshing & I enjoy it!