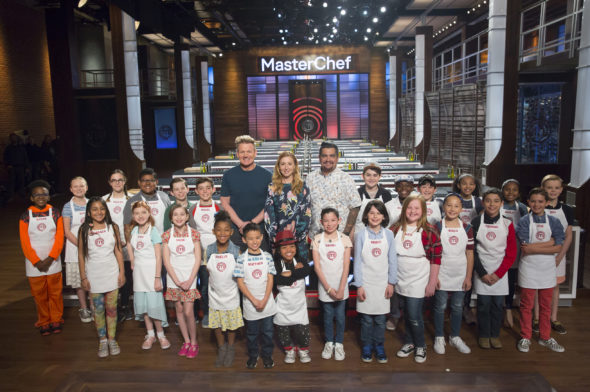 How delicious is the seventh season of the MasterChef Junior TV show on FOX? As we all know, the Nielsen ratings typically play a big role in determining whether a TV show like MasterChef Junior is cancelled or renewed for season eight. Unfortunately, most of us do not live in Nielsen households. Because many viewers feel frustration when their viewing habits and opinions aren’t considered, we’d like to offer you the chance to rate all of the MasterChef Junior season seven episodes here. *Status update below.

A FOX competitive reality TV series, MasterChef Junior features home cooks between the ages of eight and 13 years, vying for the title, trophy, and a large cash prize. Returning judges and mentors Gordon Ramsay and Christina Tosi are joined by Aarón Sanchez, who has served as a judge on the US MasterChef. Season seven will include a breakfast mystery box challenge, meal preparation for 51 circus performers, and a pop-up restaurant challenge.

What do you think? Which season seven episodes of the MasterChef Junior TV series do you rate as wonderful, terrible, or somewhere between? Should FOX cancel or renew MasterChef Junior for an eighth season? Don’t forget to vote, and share your thoughts, below.