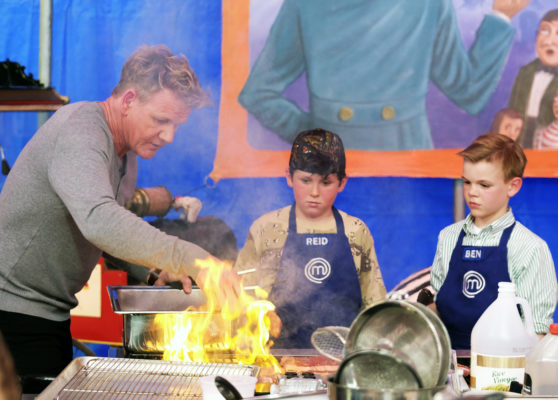 Is the kitchen closed for good? Has the MasterChef Junior TV show been cancelled or renewed for an eighth season on FOX? The television vulture is watching for the latest cancellation and renewal news, so this page is the place to track the status of MasterChef Junior, season eight. Bookmark it, or subscribe for the latest updates. Remember, the television vulture is watching your shows. Are you?

A FOX competitive reality TV series, MasterChef Junior features home cooks between the ages of eight and 13 years, vying for the title, trophy, and a large cash prize. Returning judges and mentors Gordon Ramsay and Christina Tosi are joined by Aarón Sanchez, who has served as a judge on the US MasterChef. Season seven will include a breakfast mystery box challenge, meal preparation for 51 circus performers, and a pop-up restaurant challenge.

The seventh season of MasterChef Junior averaged a 0.75 rating in the 18-49 demographic and 2.83 million viewers. Compared to season six, that’s down by 6% and 11%, respectively. Find out how MasterChef Junior stacks up against the other FOX TV shows.

Will FOX cancel or renew MasterChef Junior for season eight? Once again, the series looks all but officially renewed, since they began casting the junior home cooks for the eighth installment back in December of last year. Since even renewals can be cancelled, I’ll update this page with breaking developments. Subscribe for free MasterChef Junior cancellation and renewal alerts.

What do you think? Are you happy that the MasterChef Junior TV show has been renewed for season eight? How would you feel if FOX cancelled this TV series, instead?

PLEASE bring back Master Chef Jr. The kids are so entertaining & they are just awesome with all their culinary skills at such a young age. I like the adults, but like the kids better. Also, Gordon is much nicer a person with the kids & has fun with them.

Really anxious to see Season 8. There is nothing much to watch on TV right now. Sure wish Master Chef Jr Season 8 would come on!

This show needs to be cancelled. In fact it should I e happened a long time ago. Or find some new judges. This is not Ramsay’s forte, and the whole niceness to them is really annoying. Focus on the real master chef show and not this watered down version

I say renewal it. I like it and chife Ramsay went on a Lim to save Katie one of the 4 people are trunering in for.