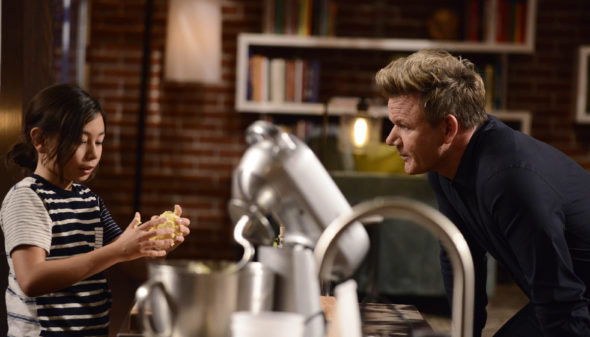 Has the pantry gone dark? Is the MasterChef Junior TV show cancelled or renewed for a seventh season on FOX? The television vulture is watching for the latest cancellation and renewal news, so this page is the place to track the status of MasterChef Junior, season seven. Bookmark it, or subscribe for the latest updates. Remember, the television vulture is watching your shows. Are you?

A FOX competitive reality TV series, MasterChef Junior features home cooks between the ages of eight and 13 years, vying for the title, trophy, and a large cash prize. Gordon Ramsay and Christina Tosi once again serve as judges and mentors. Joe Bastianich, who was a judge-mentor alongside Ramsay and Graham Elliot in the first three seasons, has returned to the role, as well.

The sixth season of MasterChef Junior averaged a 0.79 rating in the 18-49 demographic and 3.19 million viewers. Compared to season five, that’s down by 24% and 11%, respectively. Find out how MasterChef Junior stacks up against the other FOX TV shows.

Will FOX cancel or renew MasterChef Junior for season seven? It looks all but officially renewed, as they began casting the junior home cooks for a seventh installment back in December of last year. Since even renewals can be cancelled, I’ll keep an eye on the Nielsens and update this page with breaking developments. Subscribe for free MasterChef Junior cancellation and renewal alerts.

What do you think? Are you happy the MasterChef Junior TV show was renewed for season seven and season eight? How would you feel if FOX had cancelled this TV series, instead?

I love to watch the talented boys and girls cook their incredible dishes. I would love to see you add glass or clear plastic in the rail on the second floor though, makes me nervous every time I see the kids hang on it. But again, love the show!

I’d love to continue watching this. The past winners have inspired me to watch more when it comes to anything coming out of the kitchen. Please don’t cancel the show! Keep the seasons coming!

Pls don’t cancel the mc jr. It was so fun to watch such a young age that can cook better than mine. Looking forward to watch another season

Please do not cancel Master Chef Jr! Children need more productive things they can do on TV! Cooking is fun, and they can even have bake sells to make extra cash! Families love this show! Please don’t cancel this show!

Please renew those kids are such awesome cooks truly amazing for them to be so young.

Please renew Masterchef Jr. It’s the best show on Fox! I would miss it.!

MasterChef Junior and Showtime at the Apollo have been officially renewed. Look at the press release for the FOX 2018-19 schedule. These two shows are both listed as being part of the 2018-19 programming slate.

The press release is a bit confusing. FOX lumped the summer 2018 shows in with the 2018-19 announcement. MasterChef Junior, Showtime at the Apollo, Love Connection, Beat Shazam, The Four, and So You Think You Can Dance are all listed as being part of 2018-19 but none of them have been officially renewed yet.

I understand your rationale. Today, I asked FOX for clarification and the show’s rep confirmed that MC Jr has not been officially renewed for a seventh season yet.

Please bring back Masterchef Junior, I love the show. Was really looking forward to the new season.

I love watching this show.