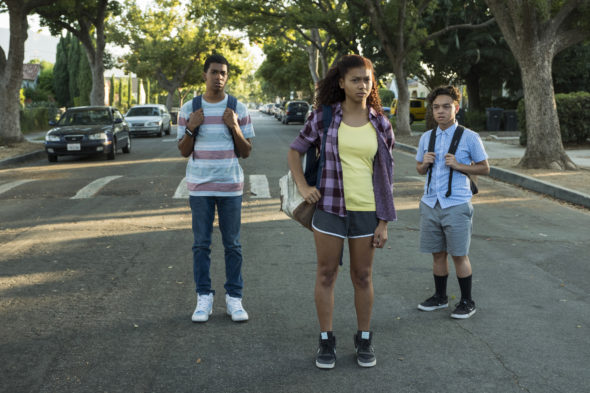 Cesar Diaz (Tinoco), Ruby Martinez (Genao), Monse Finnie (Capri), and Jamal Turner (Gray) are bright, streetwise friends who are trying to acclimate themselves to their tough, new high school, in L.A.’s South Central neighborhood. Throughout the journey, they lean on each other, but also find their friendship tried and tested.

Series Finale:
Episode #38 — The Last Chapter
As Jamal tries to figure out who’s following him and Ruby’s prom preparations go awry, the friends come together for a final celebration.
First aired: October 4, 2021.

What do you think? Do you like the On My Block TV series? Should this Netflix TV show be ending or renewed for a fifth season?

Yaaaaaayyyy it’s coming on my birthday

Not enough of these type of drama shows available today. VERY sorry to see this show go. Please reconsider your decision!

This is truly a fabulous show! It’s entertaining, poignant, realistic, family oriented yet based in experiences of a tough area with bright highlights of family and friendship. Please bring back for a season 4!

Please bring this show back. It’s really a great show about LA

I love On My Block. This is a great show. I can’t wait to see the next season.

I am an older adult but let me tell I loved the show watched it til the end it was awesome.Keep up the good work waiting for Next season.

Excellent series!!!!
I absolutely love the show. It would be a serious mistake to cancel It, when It’s just now creating a positive buzz, throughout the country. I live In the state of New York, my sister In Atlanta, GA.,
plus, my cousin In Seattle, WA, we all watch the show. We all know people that watch. Please, don’t take Jasmine away from us…
WE LOVE HER!!!!!!

Throughout all the popular shows I’ve watched recently this one does the best of portraying what life in a lower income area is really like. It has the main characters as all people of color, which media today does not represent very well. From my stand point (I’m a teenager), the portrayal of these kids is very true to how a lot of kids these days act. Whether parents believe it or not cussing is what a lot of kids do starting from about the age of 13 or so. Sexual activities is also something kids are exposed to. What… Read more »

OMG, they better bring it back. My daughter and I watched the whole 1st season in one day. Love it and want so much more!!!

My whole family which is me and my four children watched the whole 1st season in one day on a Saturdays of course I need more ASAP!!!!