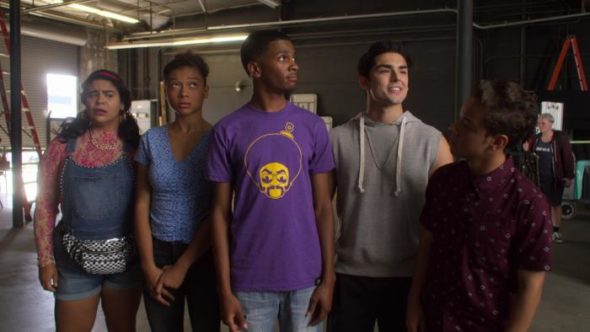 What will happen to Monse, Ruby, Jamal, and Cesar? Has the On My Block TV show been cancelled or renewed for a fourth season on Netflix? The television vulture is watching all the latest cancellation and renewal news, so this page is the place to track the status of On My Block, season four. Bookmark it, or subscribe for the latest updates. Remember, the television vulture is watching your shows. Are you?

Streaming on the Netflix subscription service, On My Block stars Sierra Capri, Jason Genao, Brett Gray, Diego Tinoco, Jessica Marie Garcia, and Julio Macias. From creators Lauren Iungerich, Eddie Gonzalez, and Jeremy Haft, this coming-of-age series centers on four teen friends — Cesar Diaz (Tinoco), Ruby Martinez (Genao), Monse Finnie (Capri), and Jamal Turner (Gray). They’re bright, streetwise high school kids, in Los Angeles’ South Central neighborhood. Throughout the journey, they lean on each other, but also find their friendship tried and tested. In season three, they thought life was about to return to what passes for normal in Freeridge. Instead, the stakes get even higher for the quartet of friends.

Unless they decide to publicize viewership, it is difficult to predict whether Netflix will cancel or renew On My Block for season four. Since Netflix isn’t ad-supported, it can take a chance on series it believes in and stories that need telling, but sooner or later it comes down to production costs, versus viewership numbers. Generally speaking, Netflix TV shows which are going to be renewed are usually picked up within a month or so of the series or season premiere. This series attracts a good amount of attention so, I think it will be renewed. I’ll keep my ears open and an eye out for news, and will update this page with breaking developments. Subscribe for free alerts on On My Block cancellation or renewal news.

1/30/21 update: On My Block has been renewed for a fourth and final season by Netflix.

What do you think? Are you glad that the On My Block TV show has been renewed for a fourth season? Are you sorry that there won’t be a fifth season?

I absolutely love this show. However the ending of season 3 really wrapped things up and looked like a farewell episode. If the show continues, it might have to be with a different cast/setting, since the story of our beloved quartet seems to have ended; specially with that 4-year leap.

This show is written and show-run by an out-of-touch, middle-aged white woman who grew up in Brentwood and her white husband. The way she speaks about being a savior for the cast is gross, and you can see from the first episode that there are issues when the line is that kids in the hood know the difference of every type of gun by sound alone. It’s the definition of casual racism.

They kinda wrapped up and tied up all the loose ends of the show so a renewal seems unlikely.