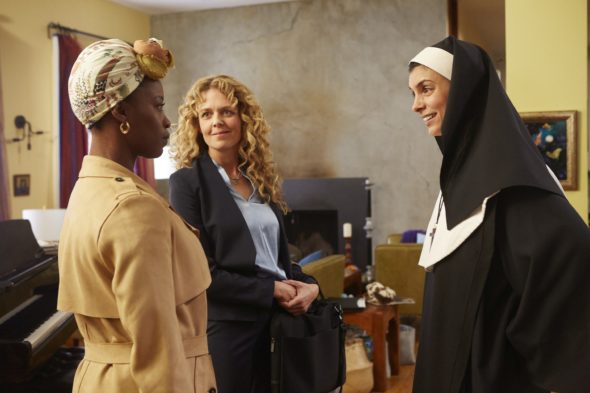 What’s on the agenda? Has the Workin’ Moms TV show been cancelled or renewed for a fourth season on Netflix? The television vulture is watching all the latest TV cancellation and renewal news, so this page is the place to track the status of Workin’ Moms, season three. Bookmark it, or subscribe for the latest updates. Remember, the television vulture is watching your shows. Are you?

A Canadian comedy from from CBC creators Catherine Reitman and Philip Sternberg (who are married in real life) Workin’ Moms stars Reitman, Dani Kind, Juno Rinaldi, Dennis Andres, Jessalyn Wanlim, Sarah McVie, Sternberg, Ryan Belleville, and Oluniké Adeliyi. The Netflix ensemble centers on four Toronto mothers who return to work, after the births of their respective babies. As the series follows this group of friends, it takes a deep dive into the challenges, joys, failures, and successes faced by working mothers.

Unless they decide to publicize viewership, it is usually difficult to predict whether Netflix will cancel or renew a TV show like Workin’ Moms. Since the show originates on Canada’s CBC, where season four is in production. I think is more likely than not that Netflix will pick it up too. The streaming service hasn’t done much to promote Workin’ Moms. They don’t even have photos up on the press site. At first glance, it might seem like they’re ignoring it, but I suspect that’s because they got it cheap, which is why I think it will be renewed for a fourth season. Since this is speculation, I’ll keep an eye on the trades and press releases and update this page with any developments, so subscribe for free Workin’ Moms cancellation or renewal news alerts.

What do you think?  Are you glad that the Workin’ Moms TV show has been renewed for a fourth season on Netflix? How would you feel if this TV series had been cancelled, instead?

Never heard of it…. and don’t watch anything on Netflicks.