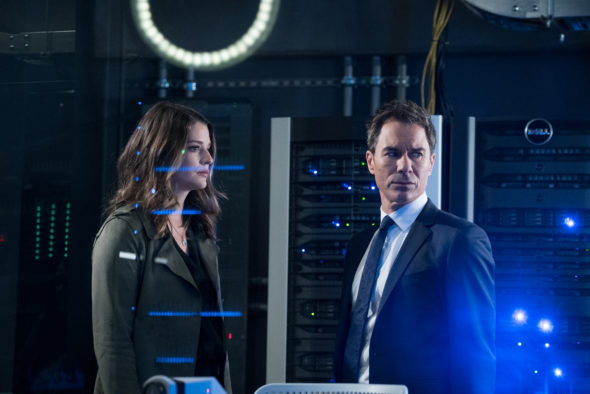 Has the journey ended? Is the Travelers TV show cancelled or renewed for a fourth season on Netflix? The television vulture is watching all the latest TV cancellation and renewal news, so this page is the place to track the status of Travelers, season four. Bookmark it, or subscribe for the latest updates. Remember, the television vulture is watching your shows. Are you?

A Netflix sci-fi mystery, Travelers stars Eric McCormack, MacKenzie Porter, Nesta Cooper, Jared Abrahamson, Reilly Dolman, Patrick Gilmore, J. Alex Brinson, Leah Cairns, and Jennifer Spence. The drama unfolds in a post-apocalyptic future, in which special operatives known as “travelers” go back in time to save humanity from destruction. Unlike much time-travel fiction, there is no time machine involved. Instead, a traveler transfers his or her consciousness into the body of “target” just prior to that person’s death, then uses the person’s identity as a cover, while carrying out secret missions.

Unless they decide to publicize viewership, it is difficult to predict whether Netflix will cancel or renew Travelers for season four. Flying blind, I think it will be renewed. Although the series started out as a co-production between Canada’s Showcase and Netflix, as of season three, it is solely a Netflix TV series. I would have expected them to announce this season as the third and final season if they were ready to end it. I’ll keep an eye on the trades and press releases and update this page with breaking developments. Subscribe for free Travelers cancellation or renewal alerts.

**2/1/2019 Status Update: Travelers has been cancelled; there will be no season four on Netflix. Details here.

What do you think? Did you hope the Travelers TV show would be renewed for season four? How do you feel, now that Netflix has cancelled this TV series, instead?

Just found travelers on Netflix the best series on the entire Netflix Platform after trying many other series then find that there was no season 4 what is it with shows get into a series and then ends for no reason, for goodness sake NCIS has been running for years surely others can write a fantastic series like Travelers and allow it to run…NETFLIX you have an opportunity to SHINE don’t waste it…Make Season 4 and allow this Series to Develop.

Just found the Travelers series on Netflix and I am blown away. This a great series and I can’t believe that Netflix cancelled season 4…. I want more…. Can Netflix get this show back.

Please oh please make season 4. For crying out loud the world needs it.

The first 2 seasons I found profoundly good, season 3 only being let down by the needless inclusion of the f-word in several episodes. I was in fact amazed that this was cancelled. Sob.

Noooooo! Say it ain’t so!

Another great show gone to the graveyard. I guess i’ll go watch some dumb sop operas or some made up language shows that netflix have been showing

This has been wonderful show to watch! I was soo disappointed to Season was cancelled‍♀️‍♀️‍♀️

The Travelers was a great series. I couldn’t wait to get to the next episode when watching. I cannot believe they would cancel such a well done show with all the crap shows that are renewed. BRING IT BACK!

I started watching this show and really got caught up in it. I have to believe it was a very popular series with NETFLIX. So what idiot decided to cancel this great show. They should be fired. I hope some other network would pick them up. Maybe HBO.

I can’t believe that Travelers has been canceled! I never expected to get caught up in it, but I did and I hope Netflix and the producers read these posts. Obviously, I am not alone.