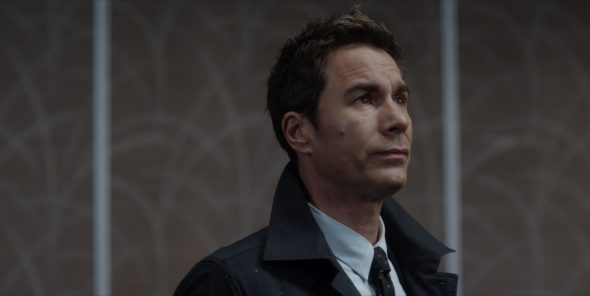 It’s official. Earlier this month, news broke that the Travelers TV show had been renewed for a third season on Netflix and Showcase. Now, star Eric McCormack confirms the Travelers season three renewal. He has also announced that production will begin in a week and a half. Check out his video, below.

A sci-fi mystery drama, Travelers also stars MacKenzie Porter, Nesta Cooper, Jared Abrahamson, Reilly Dolman, and Patrick Gilmore. The Netflix TV series centers on a group of people who, although they are from the future, are living in the present day. Despite appearing to lead ordinary lives, this team is working behind the scenes to save the world. In the video, McCormack also confirms he will direct the Travelers season three premiere, which he expects to drop this fall.

Check out this Netflix press release, to learn more.

SEASON THREE OF “TRAVELERS” TO DEBUT ONLY ON NETFLIX

Eric McCormack, who is set to direct the season three debut, confirmed the news today:

“Before I was Will Truman again, I was a Traveler. And I am so excited to be able to tell our fans, worldwide, that Brad Wright’s subtle and stunning sci-fi drama is back for a third season. I am so proud of this show, particularly that it’s all-Canadian. From our devoted Vancouver crew, to an uber-talented young cast who hail from Alberta, BC, Manitoba and Ontario, to my producing partners and our Toronto roots, Travelers is a series as Canadian in its creation, as it is global in scope. I am counting the days ’til I return, not just as Special Agent Grant MacLaren, and as a producer, but as the director of the 3rd season premiere. Travelers will continue to be unwavering in its dedication to Canadian talent, and in its drive to be one of the strongest, most binged shows on Netflix.”

“Our partner Eric said it best. We’d like to add our gratitude to our viewers in Canada on Showcase – as well as the Corus and Sky Vision teams – for two extraordinary seasons. We are excited to start shooting Season 3 this March in Vancouver, and to continue the Travelers story for fans in Canada and around the world, only on Netflix.”

What do you think? Are you a fan of the Travelers TV series. Do you plan to check out season three when it debuts on Netflix? Let us know, below.

Travelers is a new take on the age old question of time travel and whether or not we can really change anything and what the consequences are if we succeeded. I look forward to each season and am shocked \the ending which makes us think it’s not coming back. The best shows are cancelled,makes no sense.. I hope I am wrong and we’ll all get to see the next chapter in the travelers saga.. Will it make a difference if the director knows the mission failed? If he tries again, what outcome could there possibly be? Look forward to some… Read more »

A very good show, glad to hear it is online for a 3rd season.

I only hope the 3rd will follow with many more.

I enjoy this show and am glad Netflix picked it up so it can continue. I wish everything were on Netflix so I could watch as many episodes as I like with NO commercials!

Love your show. Please keep up the good work.
Thanks Martin

Love your show. Please continue with what you are doing.

Loving the show Travelers! My husband and I found it one day just scrolling through Netflix and ended up binge watching! We can’t wait for the third season to start!!!

Never understood “Binge Watching” before until Travelers. The “just one more episode” is now imbedded into my vocabulary.

Totally enjoyed watching this in depth sci fi and look forward to the new seasons!

*scream* Love this show! Watch it on Netflix in the UK, patiently waiting for December when Season 3 will drop, damn Mackenzie is fine, love ’em all though…

Hooray. =so excited. Great show and really looking forward to season 3. Thank you!