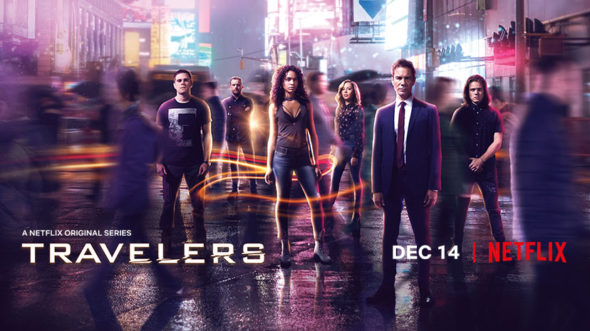 How compelling is the third season of the Travelers TV show on Netflix? As we all know, the Nielsen ratings typically play a big role in determining whether a TV show like Travelers is cancelled or renewed for season four. Netflix and other streaming platforms, however, collect their own data. If you’ve been watching this TV series, we’d love to know how you feel about the season three episodes of Travelers. We invite you to rate them for us. **Status update below.

A Netflix science-fiction mystery, Travelers stars Eric McCormack, MacKenzie Porter, Nesta Cooper, Jared Abrahamson, Reilly Dolman, Patrick Gilmore, J. Alex Brinson, Leah Cairns , and Jennifer Spence. The drama unfolds in a post-apocalyptic future, in which special operatives known as “travelers” go back in time to save humanity from destruction. Unlike much time-travel fiction, there is no time machine involved. Instead, a traveler transfers his or her consciousness into the body of “target” just prior to that person’s death, then uses the person’s identity as a cover, while carrying out secret missions.

What do you think? Which season three episodes of the Travelers TV series do you rate as wonderful, terrible, or somewhere between? Should Netflix have cancelled or renewed Travelers for a fourth season? Don’t forget to vote, and share your thoughts, below.

**2/1/2019 Status Update: Travelers has been cancelled; there will be no season four on Netflix. Details here.

Really sucks this is cancelled. Fell in love with all the characters and was looking forward to the retry!!!

We really need season 4 of ‘Travelers’ it is a great show …..

Just watched all 3 seasons of the travelers … I loved it and was disappointed to hear it was cancelled….. Great series really hope it can be revived …

Got turned onto this show just recently. What a great show and original premise. Was very disappointed to hear it’s been cancelled, a true shame. Hopefully Netflix will reconsider.

I am seriously contemplating cancelling my subscription to Netflix after they cancelled Travelers. What a pity that the top brass sitting atop the Netflix programming box can’t see what a terrific show this actually is/was. Maybe i’ll Find something just as good on Hulu…

I have absolutely loved the entire series!! Please continue, there is infinite potential for this show