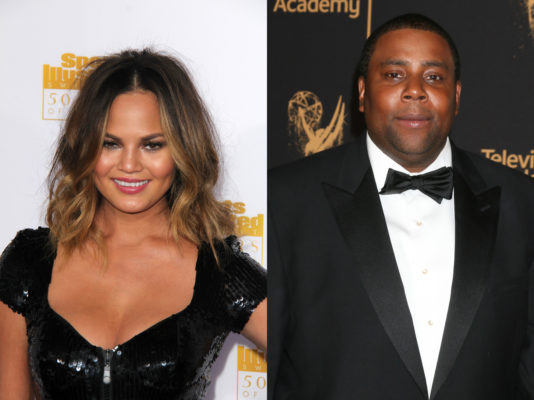 NBC is ready for some laughs. Today, the network announced they’ve ordered a new TV show called Bring the Funny.

The comedy competition series “will feature the world’s best comedic acts and, for the first time on television, embrace every style of comedy performance in one competition.” Judges include Chrissy Teigen, Kenan Thompson, Jeff Foxworthy, and Amanda Seales joins as host.

NBC has ordered 10 episodes of Bring the Funny. A premiere date has not yet been announced, but you can read more info below:

UNIVERSAL CITY, Calif. — Feb. 1, 2019 — NBC’s proud comedy legacy, which has opened doors for countless comedians, is ready to “Bring the Funny” with a new competition series for the next generation of comedy lovers. The series will feature the world’s best comedic acts and, for the first time on television, embrace every style of comedy performance in one competition.

The 10-episode series will bring together some of the most prolific comedians in the industry to serve as judges – “Saturday Night Live’s” longest-running cast member Kenan Thompson, cultural tastemaker Chrissy Teigen and comedy icon Jeff Foxworthy. Comedian Amanda Seales will serve as host for the competition.

In partnership with the international organization Just for Laughs, which has given rise to some of today’s most successful comedic acts via its iconic festivals, tours and television series, “Bring the Funny” will feature the best of the best stand-ups, sketch troupes and comedic variety acts. From solo comics to sketch troupes to musicians, magicians, podcasters, puppeteers, YouTubers and more — anyone who can make audiences laugh will have the chance to receive the career-changing $250,000 prize package and see their name in lights in the Bring the Funny showcase.

“Great comedians know how to make us laugh while serving as a reflection of the times, and we are excited to embrace and support the myriad of ways funny people bring us levity and humor today,” said Meredith Ahr, President, Alternative and Reality Group, NBC Entertainment. “Kenan, Chrissy, Jeff and Amanda are not only hilarious, but are pioneers in their respective arenas and understand what it takes to have longevity and breadth in this industry. They, along with our partners at Just for Laughs, will be an insightful resource for the talent that takes our stage.”

The series is looking for an incredibly diverse slate of acts across all ages and walks of life. For those interested in competing in “Bring the Funny,” please visit: www.bringthefunnycasting.com. Must be age 13 or older, eligibility requirement apply.

What do you think? Are you a comedy fan? Will you check out Bring the Funny?

Is it family friendly?

No thank you! Especially since Teigen is involved.

I really liked last comic standing, so I was happy to see that until I clicked on it and saw her picture…no thanks for me too