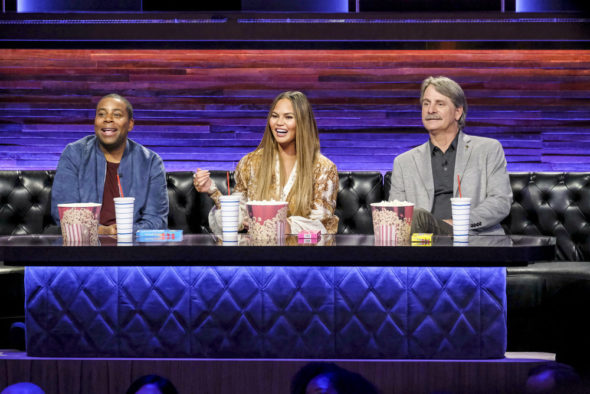 Are there more laughs to come? Has the Bring the Funny TV show been cancelled or renewed for a second season on NBC? The television vulture is watching all the latest cancellation and renewal news, so this page is the place to track the status of Bring the Funny season two. Bookmark it, or subscribe for the latest updates. Remember, the television vulture is watching your shows. Are you?

Ain NBC comedy competition series, Bring the Funny is hosted by comedian Amanda Seales, with Kenan Thompson, Chrissy Teigen, and Jeff Foxworthy serving as judges. The series features a wide variety of performers aiming for the funny bone. Those who hit the target and pass muster with the judges get a shot at winning a $250,000 prize package, as well as the chance to see their name in lights during the season finale. In that live episode, the viewing audience gets to vote for its favorite act.

The first season of Bring the Funny averaged a 0.78 rating in the 18-49 demographic and 3.95 million viewers. Find out how Bring the Funny stacks up against other NBC TV shows.

Will NBC cancel or renew Bring the Funny for season two? The series got off to a good start and appears to be very compatible with its lead-in, America’s Got Talent. So, I think Bring the Funny will be renewed. I’ll update this page with breaking developments. Subscribe for Bring the Funny cancellation or renewal alerts.

What do you think? Do you hope Bring the Funny will be renewed for a second season? How would you feel if NBC cancelled this TV show, instead?

Please, please, please bring back Bring The Funny. It helped me a lot in my recovery from Chemo treatment for Cancer. Thank God I am now in remission; but the show made me laugh and took my mind off of things for a while. Bring it back so it can do it for someone else. Nothing but love for the show.

Yes please bring back the funny. I loved it

I loved it. Allowing comedians their own platform is a nice change of pace. We need to laugh, especially with this pandemic raging. Please bring it back. I think Amanda Seales is the perfect host.

We absolutely need and deserve Season 2. As do comics and funny people all around the world. They deserve this! Please bring this show back. The anticipation is killing me!

Sign of the Apocalypse. We need someone to tell us if something is funny? And that idiot (take your pick), of all people? Have Americans turned into complete zombies?

Absolutely bring them back! The show is a great, fresh and new concept. I appreciate that there’s lots of variety, the acts are quick (although some of them leave me wanting more). I’m following my two favorites on YouTube and Facebook! They brighten my day and the judges & host are fun to watch, too!

Get rid of Crissy Tiegen.. adds nothing to show

Not as good as LAST COMIC STANDING used to be.