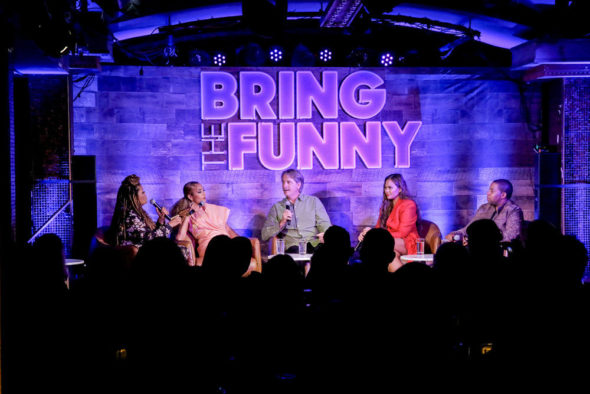 Does the first season of the Bring the Funny TV show on NBC have you busting a gut? As we all know, the Nielsen ratings typically play a big role in determining whether a TV show like Bring the Funny is cancelled or renewed for season two. Unfortunately, most of us do not live in Nielsen households. Because many viewers feel frustration when their viewing habits and opinions aren’t considered, we’d like to offer you the chance to rate all of the Bring the Funny season one episodes here.

An NBC comedy competition, Bring the Funny is hosted by comedian Amanda Seales, with Kenan Thompson, Chrissy Teigen, and Jeff Foxworthy serving as judges. The series features a wide variety of performers aiming for the funny bone. Those who hit the target and pass muster with the judges get a shot at winning a $250,000 prize package, as well as the chance to see their name in lights during the season finale. In that live episode, the viewing audience gets to vote for its favorite act.

What do you think? Which season one episodes of the Bring the Funny TV series do you rate as wonderful, terrible, or somewhere between? Should NBC cancel or renew Bring the Funny for a s second season? Don’t forget to vote, and share your thoughts, below.

What the heck was going on with the audio on the finale? I had to stop watching as I couldn’t understand what was being said.

The show was decent until the end. The winners shouldn’t have even made it into the semi-finals, let alone win. The show lost all credibility.

Exactly this. They were not funny. The judges faces said it all. They were clearly unhappy with the results.

The show was great, the finale was terrible and the mic quality for TV was so bad, I stopped watching. It should have been about the finalists, not only the judges.

I so totally agree! The audio was terrible. I couldn’t understand most of what was being said. Stopped watching after 20 minutes.

What is wrong with your audio

Oh my gosh, thank you! It was so bad that I couldn’t watch it, thought it was my ears going bad. And the close captioning did not help, that was slow and wrong as well!