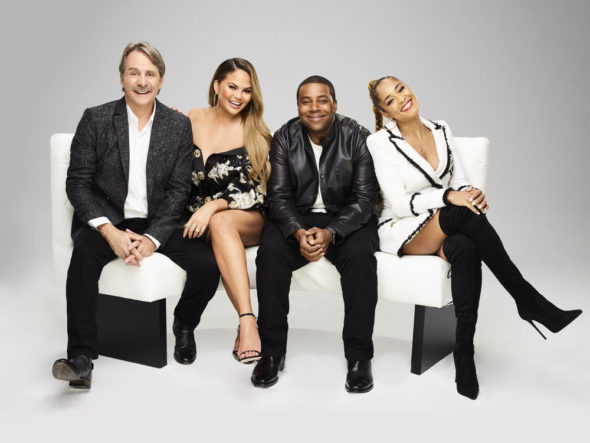 TV show description:
From executive producers David Friedman and Matilda Zoltowski, the Bring the Funny TV show is a comedy competition. The TV series shines a spotlight on comedic acts of every size, shape, and style.

The acts need to be able to make the audience laugh and pass muster with the judges. Those who do get a shot at winning a $250,000 prize package, as well as the chance to see their name in lights during the Bring the Funny finale. Because the finale is live, the home audience then has the opportunity to vote for the funniest one of all.


What do you think? Do you like the Bring the Funny TV series? Should this NBC TV show be cancelled or renewed for another season?

Please bring this show back! No, not all the acts are super funny but heck, most of them were just great fun. It’s so hard to get good clean fun comedy where every other word is not the “F Bomb”. It takes more talent to bring clean comedy to the stage than it does just trying to shock a laugh out of the audience or just humiliating some one to get a laugh at their expense.

I love love love bring the funny I binge watched it twice already and I really hope they bring it back for a second season! I thought the contestants were great. Oh and I love Keenan!

Some of the acts are funny, some are pretty separate, insulting to intelligence. But WHY OH WHY is Theissen a judge? She is not a comedienne, she was a model. What are her qualifications to be a judge? Worse yet, she came out with that Twitter insult yesterday and called our President some awful, crude names. No more for me. Outtta here, and so are my family and friends.

I love Bring the Funny. I hope NBC brings it back for season 2.

I just watched my recording of the latest episode. They kept saying that now the audience “has a say” but how?? how do we vote?

I really cant stop laughing. Nice to be able to laugh so much. Hope they bring it back.

This is the ABSOLUTE WORST show this year. I get its a comedian showcase, but what is Chrissy Teigen doing on there? She’s not the sharpest tool in the shed and her commentary is phony-annoying…she’s even annoying to look at. I feel bad for Kenan because he’s the only relevant person on the panel and he’s stuck sitting next to 2 has-beens. Good luck Kenan…I wish you the best.

Not funny. Jeff made it clear by stating he would allow his fellow judges pick first. Funny does have anything to do with who the judges pick. Will never watch again.

I love “Bring the Funny” and DEFINITELY hope it’s not cancelled. My daughter told me about it and I’ve watched it, and I love it.

Bring the Funny? More like, Bring the Coroner. I just watched 10 “comedians” die on stage.