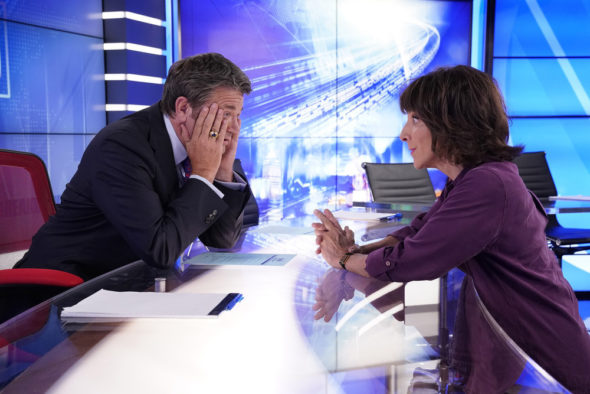 Can Kate and her mom continue to work together — and bring the funny? Will viewers continue to watch? Has the Great News TV show been cancelled or renewed for a third season on NBC? The television vulture is watching for the latest cancellation and renewal news, so this page is the place to track the status of Great News, season three. You can bookmark this page or subscribe for the latest updates. Remember, the television vulture is watching your shows. Are you?

Airing on the NBC television network, Great News stars Briga Heelan, Andrea Martin, Adam Campbell, Nicole Richie, Horatio Sanz, and John Michael Higgins. This sitcom revolves around Katie Wendelson (Heelan), a frustrated cable news producer. Her work and personal lives collide when her stay-at-home mom, Carol (Martin), decides to follow her dreams and gets an internship on Katie’s national news show. It’s Katie’s worst nightmare, until she realizes that having her biggest cheerleader at her side does have its advantages.

The second season of Great News on NBC averaged a 0.73 rating in the 18-49 demographic with 2.97 million viewers. Compared to season one, that’s down by 7% in the demo and down by 11% in total viewers. Compare its standing against the other NBC TV shows we are tracking.

Despite some dismal ratings in the first season, NBC renewed this newbie sitcom for a second season. It had a very positive second season debut but the ratings have been really poor and I’ll watch the ratings and will update this page as needed. Subscribe for free updates on any cancellation or renewal news regarding Great News.

5/11/18 update: NBC has cancelled their Great News TV show so there won’t be a third season. Details here.


What do you think? Do you think that the Great News TV show should have been renewed for a third season? Are you sorry that NBC cancelled this TV show, instead?

How can you cancel a show when no one knows about Annie, if Paul survives, how Jordan and TC get along…let Netflix pick up the show