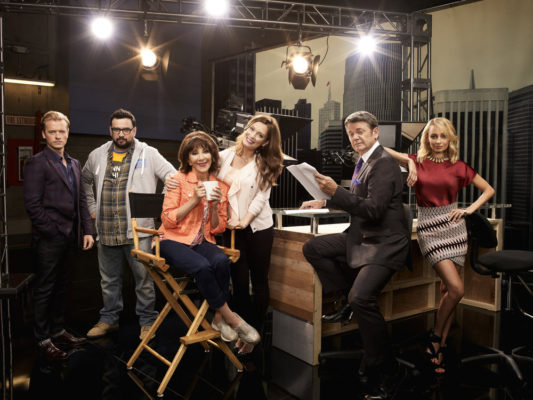 Can Kate and the staff of The Breakdown keep their show going on season two of the Great News sitcom? As we all know, the Nielsen ratings typically play a big role in determining whether a TV show like Great News is cancelled or renewed for a third season. Unfortunately, most of us do not live in Nielsen households. Because many viewers feel frustration, when their viewing habits and opinions aren’t considered, we’d like to offer you the chance to rate all the season two episodes of Great News below.

Great News stars Briga Heelan, Andrea Martin, Adam Campbell, Nicole Richie, Horatio Sanz, and John Michael Higgins. This NBC sitcom revolves around Katie Wendelson (Heelan), a frustrated cable news producer. Her work and personal lives collide when her stay-at-home mom, Carol (Martin), decides to follow her dreams and gets an internship on Katie’s national news show. It’s Katie’s worst nightmare, until she realizes that having her biggest cheerleader at her side does have its advantages.

What do you think? Which season two episodes of the Great News TV series do you rate as wonderful, terrible, or somewhere between? Should NBC renew the Great News show for a third season? Don’t forget to vote, and share your thoughts, below.

5/11/18 update: NBC has cancelled their Great News TV show so there won’t be a third season. Details here.

I loved this show!!!! I NEED a season 3 the ratings are great the show is so relatable and hilarious!!