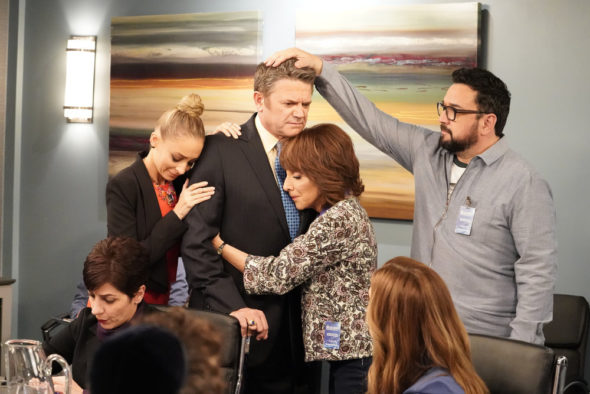 Well, this sure is bad news for fans. NBC has cancelled its Great News TV show after only two seasons. The sitcom was never a big earner in the Nielsen ratings, and the season two renewal was only for 13 episodes, so the fact that there will be no season three isn’t a huge surprise.

An NBC sitcom, Great News stars Briga Heelan, Andrea Martin, Adam Campbell, Nicole Richie, Horatio Sanz, and John Michael Higgins. The workplace comedy revolves around Katie Wendelson (Heelan), a frustrated cable news producer. Her work and personal lives collide when her stay-at-home mom, Carol (Martin), decides to follow her dreams and gets an internship on Katie’s national news show, The Breakdown. It’s Katie’s worst nightmare, until she realizes that having her biggest cheerleader at her side does have its advantages.

Great News: A Look at the Ratings

The second season of Great News on NBC averaged a 0.73 rating in the 18-49 demographic with 2.97 million viewers. Compared to season one, that’s down by about 7% in the demo and 11% in total viewers. It ranks near the bottom of scripted NBC TV shows.

What do you think? Did you expect NBC to cancel or renew its Great News TV show for a third season? Let us know, below.

We need show back again…

Oh…I would be horribly remiss to not also give Andrea Martin her praise. I loved her back in the days of SCTV, and she is not 1% less now. Absolutely ageless and I adored seeing her again.

This is painful. I only just discovered this show’s existence on Netflix and I am loving it. The first couple episodes were okay and then it really grew on me quickly. Though I’d never previously heard (which meana nothing) of Briga Heelan, she was just ridiculously good in the lead and a fierce comedic talent. I don’t say that lightly. Her facial expressions alone add so much to every joke. It’s…just…painful to see it go. Not as painful as seeing 30 Rock die…or Arrested Development in it’s day (or Running Wilde or the original live action The Tick). There are… Read more »