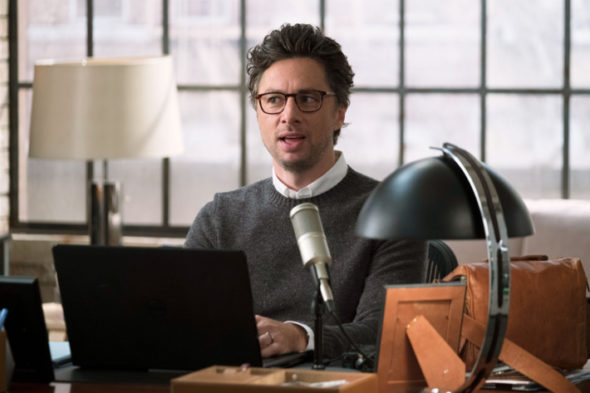 Alex, Inc. is going out of business. Variety reports ABC has cancelled the TV show after only one season.

Alex, Inc. has had a rough time in the ratings since it debuted in March. With only one episode to go, season one is averaging a .85 rating in the 18-49 demo and only 3.444 million viewers, making it one of ABC‘s lowest-rated comedies for the 2017-2018 season.

Goodbye Alex Inc.
I’m forever grateful to our outstanding crew who worked their asses off. And thanks to everyone who gave the show a chance. #DragonEnergy pic.twitter.com/5fqfydscus

What do you think? Have you seen Alex, Inc.? Do you think it deserved a second season?

So sad to see this show go. We loved the chance to watch Zach Braff again.

I really enjoy this show and beg for a second season. The first show I watched, I thought that I didn’t know if it would be successful. However, as I continued to watch each episode, I liked it more and more. I want to continue to see a very supportive family who roots for Alex’s success.

Makes me sad to see it end so quickly. It’s a nice show that I was able to sit down & watch with my kids, knowing they wouldn’t be seeing anything inappropriate. It deserves a second season. A little more time may be all it needed.

I don’t watch much network fare but ran across this gem in my Hulu Plus account just a few days ago (@ Apr 7). Have watched entire series so far. So sad it’s cancelled. Perhaps the network platform is a misfit? Perhaps this show could thrive in a more receptive venue.

I’m not entirely surprised although it wasn’t bad by any means.

It was a nice show- family oriented, not political, non-violent, not snarky or jaded. It deserves to exist.