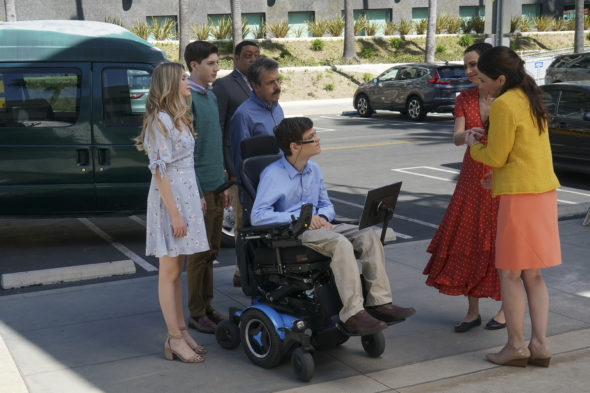 Looks like ABC has earned Maya DiMeo’s wrath. The network has cancelled the Speechless comedy series, so there won’t be a fourth season of JJ and company.

A family sitcom, Speechless stars Minnie Driver, John Ross Bowie, Mason Cook, Micah Fowler, Kyla Kenedy, and Cedric Yarbrough. Maya DiMeo (Driver) is a no-nonsense mom who will do anything for her family: husband Jimmy (Bowie), brainy Ray (Mason Cook), athletic Dylan (Kyla Kennedy), and teenager JJ (Micah Fowler), who has cerebral palsy. The third season kicked off with the DiMeo family and JJ’s aide, Kenneth (Yarbrough), heading to London to meet up with Maya’s estranged father, Martin (John Cleese), to ask him for some help. This year, Maya also has to come to terms with how fast her kids are growing up.

What do you think? Do you enjoy the Speechless TV show? Would you have watched season four of this ABC comedy series?

[Cindy McLennan contributed to this report]

I love speechless show, I watching it over and over again because I understand JJ because I have cerebral palsy too and my Mom is overprotect me too. But I know my Mom loves me so so so so so so much and I love my Mom more than anything in this world but my Mom learning how to let me to do things on my own. And this year I am going to be 18 year old and I am going to be a adult and my Mom can’t not believe it. I hoping that you guys going to… Read more »

Omg I love this show, I’m so sad that they cancelled it! It was so unique and it was heartwarming and funny. Please bring it back!! JJ, Kenneth and the DiMeo’s deserve to live on!

This show gave perspective into the lives of a family that you dont see much on tv. Huge mistake cancelling it.

Should have renewed speechless in a better time slot. It was one of my family’s favorites.

Excellent writing and acting. Much needed clever family viewing. Three generations here in UK gutted, such a gem lost…sad…..thank you for the three excellent seasons at least, sadly missed.