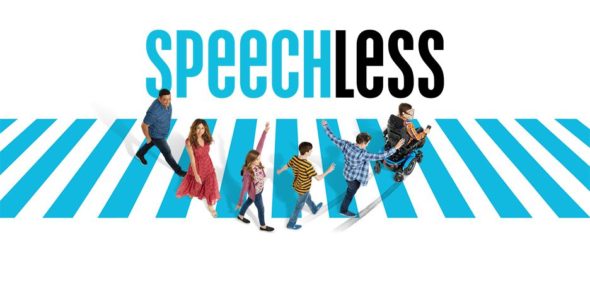 Which episodes speak to you in the second season of the Speechless TV show on ABC? As we all know, the Nielsen ratings typically play a big role in determining whether a TV show like Speechless is cancelled or renewed for season three. Unfortunately, most of us do not live in Nielsen households. Because many viewers feel frustration when their viewing habits and opinions aren’t considered, we’d like to offer you the chance to rate all the season two episodes of Speechless for us here.

An ABC sitcom, Speechless stars Minnie Driver, John Ross Bowie, Mason Cook, Micah Fowler, Kyla Kenedy, and Cedric Yarbrough. Maya DiMeo (Driver) is a no-nonsense mom who will do anything for her family: husband Jimmy (Bowie), brainy Ray (Mason Cook), athletic Dylan (Kyla Kennedy), and teenager JJ (Micah Fowler), who has cerebral palsy. In the second season, JJ is home from summer camp and the kids are sailing uncharted waters; they are going to continue at the same school they attended, last year. Now this family needs to balance fun with the responsibility participating in their community. **Status update below.

What do you think? Which season two episodes of the Speechless TV series do you rate as wonderful, terrible, or somewhere between? Should ABC cancel or renew Speechless  for a third season? Don’t forget to vote, and share your thoughts, below.

Please keep speechless on t.v ,I have a grandchild with c.p and he loves the show has been asking when it comes on again.

Speechless a 1 of a kind show. The cast and writing is amazing . There are life’s leasons imbeded in each episode, which includes the fighting spirit of JJ.
Minnie Driver is sensational. Have the courage that JJ exhibits and continue Speechless and possibly give them the 2 Two year renewal that The Goldbergs were given last year.

Please keep “Speechless” as there aren’t many programmes with disabled teens on tv anymore. Viewers need to see those with disabilities in a positive setting as possible.

Please, definitely renew this show for a 3rd season.

We love this show. It hasn’t been on for awhile and we are missing it. We don’t have much on TV for us, but we always had our ABC Wednesday night lineup. It isn’t the same without Speechless

We love this show. Pleeeeease renew it for another season! It is funny, charming and in the most positive way influencing america about disabilities. It has started so many conversations and helped normalize individuals with disabilities. It would devistate our family to lose this show. All 7 of us age 62 to 11 gather to watch it together…My daughter has cp and it is the only show that gives a voice to her….exactly the way she…and our family would like to be heard!!!! Please keep this show for a 3rd season! Its the Roseanne of disability advocacy!

Please renew for season 3! I love this show. I look forward to watching it each week.

Another great comedy this year!