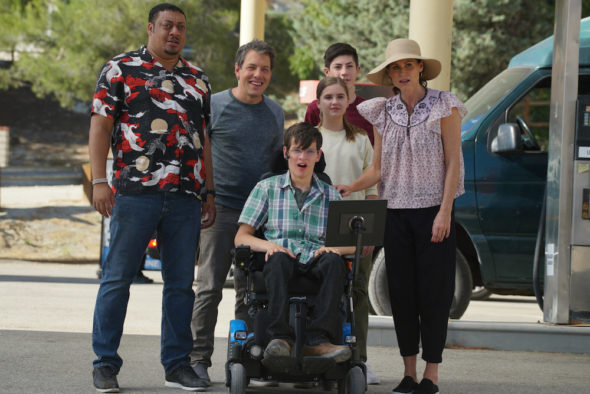 The cat doesn’t have Minnie Driver’s tongue. Late last night, the star announced ABC has renewed her Speechless TV show for a third season. According to Driver, the season three renewal is for a full season of 22 episodes. Check out her announcements, below.


So happy I spelt #speechless wrong ….

Speechless: A Look at the Ratings

Ratings have dropped some for Speechless during its second season, but the show remains a solid performer for ABC. So far, season two is averaging a 1.13 rating in the 18-49 demo and 4.333 million viewers, which means currently, it is down by about 27% and 20%, respectively.

Speechless joins fellow ABC comedies Modern Family and The Goldbergs, which have also been renewed for the 2018-19 television season.

There is still no cancellation or renewal news regarding freshman comedies Alex, Inc. and Splitting Up Together. We are also waiting to hear from the House of Mouse regarding American Housewife, Black-ish, and Fresh Off the Boat.

What do you think? Are you a fan of the Speechless TV series? Are you glad it’s been renewed for season three on ABC?

Best body show That I look forward to. I love her oxen so much that I try it myself. A really good show I hope they continue it as long as the simpsons are running

This show is truly amazing and I look foward to it. I need this in my life. Real life problems with comedy for families we are all not privileged to be introduced to but non the less something that needs to keep going as long as the simpsons!

Under rated and absolutely amazing show! Thanks to ABC for renewing!

This is one of the most genuinely funny, warm, ridiculous and actually accurate shows about disability on TV. Perfectly acted and scripted and thankfully NOT edited to make people feel sorry for JJ and his wonderful family but left wanting to stand by Mya’s side and fight with her or roll your eyes about her with Jimmy. I know people like Mya….utterly passionate and insane and this is a wonderful not to all those families who do actually deal with the same issues. Put it in a better time slot and keep it going. Utter perfection!

Thank you abc. This show is so good and I have watched every episode. I was prepared to by the second season on amazon instant video if you canceled this. Can’t wait for season 3.

I hate Minnie Driver, especially for the way she attacked Matt Damon for having a sensible take on #Metoo. She thinks rape, harassment, inappropriate comments, unintentional comments and misreading signals are all equal crimes. She’s a smoker and kills people with her second hand smoke, so she needs to be judged as well.

This has nothing to so with the show at all. Have your whinge on instagram/Twitter where it may actually get seen.