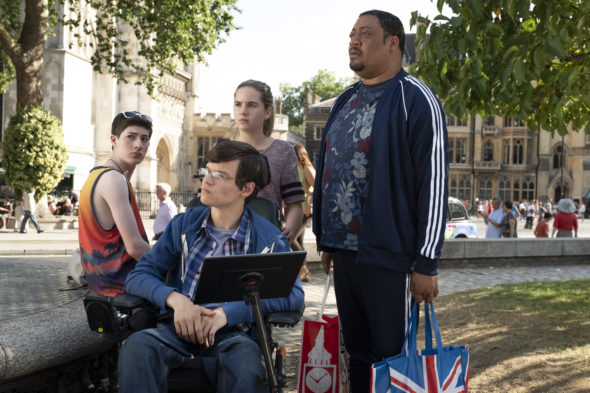 What’s the word? Is the Speechless TV show cancelled or renewed for a fourth season on ABC? The television vulture is watching all the latest cancellation and renewal news, so this is the place to track the status of Speechless, season four. Bookmark it, or subscribe for the latest updates. Remember, the television vulture is watching your shows. Are you?

An ABC family sitcom, Speechless stars Minnie Driver, John Ross Bowie, Mason Cook, Micah Fowler, Kyla Kenedy, and Cedric Yarbrough. Maya DiMeo (Driver) is a no-nonsense mom who will do anything for her family: husband Jimmy (Bowie), brainy Ray (Mason Cook), athletic Dylan (Kyla Kennedy), and teenager JJ (Micah Fowler), who has cerebral palsy. The third season kicks off with the DiMeo family and JJ’s aide, Kenneth (Yarbrough), heading to London to meet up with Maya’s estranged father, Martin (John Cleese), to ask him for some help. This year, Maya also has to come to terms with how fast her kids are growing up.

The third season of Speechless averaged a 0.49 in the 18-49 year old demographic and 2.32 million viewers. Compared to season two, that’s down by 57% and 46%, respectively. Find out how Speechless stacks up against the other ABC TV shows.

Will ABC cancel or renew Speechless for season four? The ratings have really dropped with the move to Friday nights. That could easily spell cancellation for this sitcom but I’m sure ABC would like more episodes for a syndication package (ABC Studios produces the show with 20th Century Fox Television). They could go either way with this show so I’ll keep an eye on the ratings and will update this page with new developments. Subscribe for free updates on any Speechless cancellation and renewal news.

Status Update 5/10/2019: Speechless has been cancelled; there will be no season four. Details here.

What do you think? Should the Speechless TV show have been renewed for season four? How do you feel, since ABC cancelled this TV series instead?

why there no fourth season