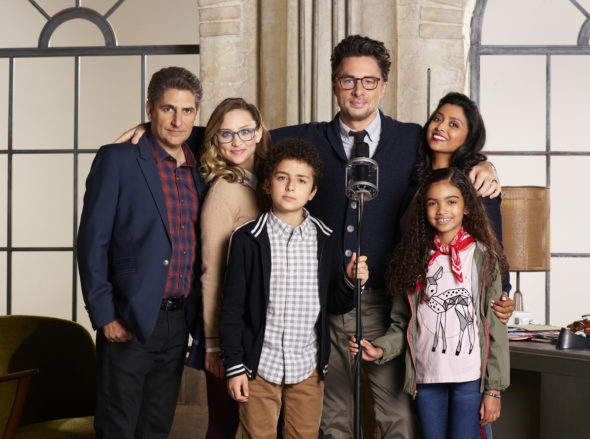 TV show description:
Based on the “StartUp” podcast by Alex Blumberg, the Alex, Inc. TV show was developed for television by Matt Tarses. The family sitcom centers on Alex Schuman (Braff).

In addition to being a husband and father of two, Alex is a successful radio journalist. One day, he decides to toss his career and fortune to the wind. He quits his job in order to found his own company.

For 16 years, Alex worked at a successful radio show called Cheer Up, which he describes as “NPR on Prozac.” After a career of doing “feel good” stories, Alex yearns for something different — more authentic. After basically getting laughed out of the room, in the wake of a pitch for a somber story, he walks out.

His wife, Rooni (Sircar) — a lawyer — is skeptical, initially. Alex wants to change the world though, and she is an admitted sucker for that, so she gives her okay, provided he doesn’t dip into their 401-K. Of course, he promptly does so, and initially hides it from her.

Despite the help of Rooni and their children, Ben (Henig), and Soraya (James), it is not long before Alex realizes starting over and starting up is a lot more difficult than he anticipated. Still, he is dedicated to launching his own own podcast company.

It’s his passion for his dreams that finally lands him a well-heeled investor. Alex has a deep desire to tell true stories — ones that really matter. To that end, he hires his cousin (Eddie) Imperioli), and his former producer, Deirdre (Matthews) to help get his company off the ground.

Will he succeed? Stay tuned.

Series Finale:
Episode #10 — The Rube Goldberg Contraption
After a company offers Alex money to expand the business, he worries his business is ruining his relationship with Rooni and the children and makes an important decision about the future. And with the future looking bright for the company, Deirdre and Eddie bring on a famous podcast producer.
First aired: May 16, 2018.

What do you think? Do you like the Alex, Inc. TV series? Should this ABC TV show have been cancelled or renewed for a second season?

I liked the show very much. I appreciated the diversity of the cast…

I never even heard of this show. Guess I won’t miss it.