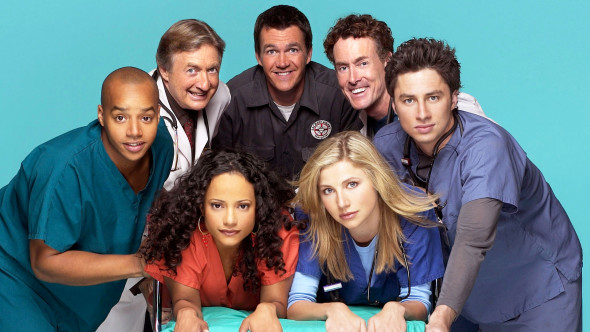 Are you a fan of Scrubs? Recently, star Zach Braff spoke with Variety about the possibility of a reunion for the NBC/ABC TV show.

When asked about a Scrubs reunion, Braff said there is talk of a TV movie:

We might do a TV movie — we daydream about that. We’re all doing so many different things that we love, so the idea of going back and signing a long contract doing years and years of “Scrubs” is not on our minds. What’s more realistic is Bill and I are very close and we often laugh about what would it look like to do a two-hour movie — like what “Psych” did.”

Later, Braff revealed he plans on featuring some of the Scrubs cast members on his new TV show, Alex, Inc.:

I plan to! I really want to do that, but we only had 10 [episodes] and I didn’t want to confuse the audience by having all of my posse from “Scrubs” come on right away, but it goes without saying that if it comes back we’ll try to get [people] on.”

What do you think? Have you seen Scrubs? Would you watch a reunion movie?

I loved Scrubs, please do something with the whole cast again

Loved Scrubs and look forward to any reunion.