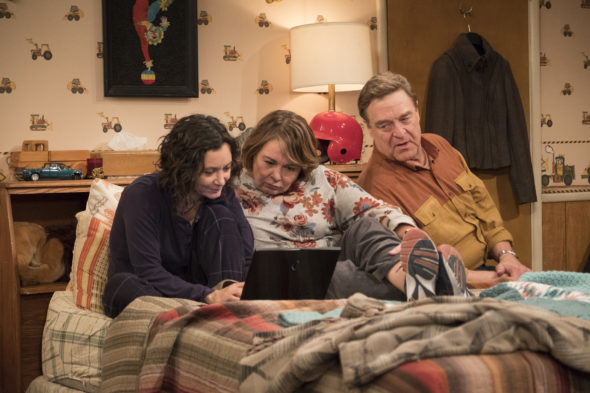 The House of Mouse is doubling down on Roseanne Barr. ABC has renewed its Roseanne TV show revival for an 11th season. The sitcom, which originally aired on the Alphabet Network between 1988 and 1997, returned for a 10th season, earlier this week.

Roseanne: A Look at the Ratings

The 10th season premiere of Roseanne earned a 5.20 rating in the 18-49 demographic and drew 18.44 million total viewers. Although its Nielsen ratings are likely to drop off, it still dwarfed all of the other ABC ratings for primetime entertainment programming (both scripted and unscripted).

As we reported earlier this week, ABC had been working on closing deals with the main cast and had until April 15th to get it done. Now the deal is sealed.

Learn more about the Roseanne season 11 renewal from this ABC press release.

‘ROSEANNE,’ TV’S BIGGEST PREMIERE THIS SEASON,
IS PICKED UP FOR AN 11TH SEASON ON THE ABC TELEVISION NETWORK

The ABC Television Network has picked up hit comedy revival “Roseanne” for an 11th season, Channing Dungey, president, ABC Entertainment, announced today. With just one day of Nielsen’s delayed viewing counted, the return of “Roseanne” saw its Total Viewer count swell by a best of season for any premiere telecast of over +3.4 million viewers to a 21.869 million average audience.  In addition, after the first day of playback, Roseanne shot up to a 6.24 rating in Adults 18-49, adding more than 1.0 rating point and over 20% to its Adult 18-49 Live + Same Day number.

“We’re thrilled that America has welcomed the Conner family back into their homes. The show is as fresh and relevant today as it was when it left the air 21 years ago. We can’t wait to see what the ‘Roseanne’ team has in store for next year,” Dungey said.

The timeless sitcom, featuring the complete original cast, new series regulars and notable returning guest stars, explores life, death and everything in between through the relatable, hilarious and brutally honest lens of the Conner household. With the inimitable Roseanne at its epicenter, fresh stories that tackle today’s issues and even more laughs from a brilliant cast and crew that haven’t missed a beat, audiences old and new will celebrate the homecoming of America’s favorite working-class family. The revival has also drawn critical raves, with The New York Times calling it “feisty and funny” and The Wall Street Journal writing that “Roseanne” is “sparkling.”

So I read where the son Jerry is suppose to be in Alaska? Well where is Jackie’s son Andy?? Never heard his name mentioned.. Maybe they’ll bring him on. I’m totally enjoying the show

This is the comment I made regarding the new Roseanne Show:
I think there should continue to be some political sparing. Families are facing this, and I think the levity can ease some of the tension. With so many of the TV shows containing one-sided political posturing, this is the first sit-com that I have enjoyed for a very long time.
I don’t know if I’m the one who is supposed to moderate it or what? Is my statement radical?
“Comment awaiting moderation” is the response that I got on the post. It has been removed. Why?

Comments are moderated (reviewed) by a human to weed out spam and abusive comments.
Your first comment was on another post: https://tvseriesfinale.com/tv-show/roseanne-season-10-ratings/comment-page-1/#comment-2657254