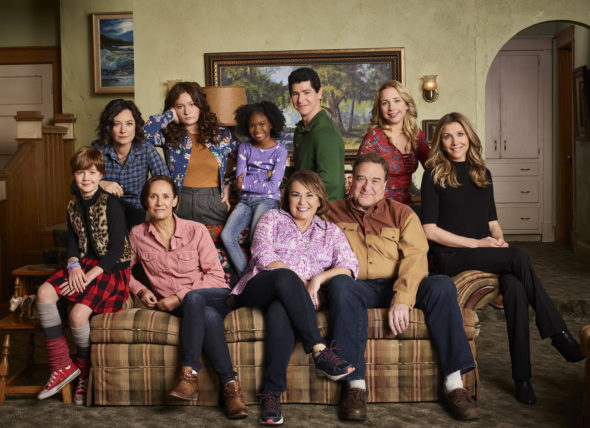 The original series ended after nine seasons in 1997. It was revived for a 10th season and ran for one successful season before being suddenly cancelled.

Series Finale:
Episode #231 – Knee Deep
Roseanne’s knee gets worse so Dan is forced to a make an important work decision; but when a major storm hits Lanford, their fortunes change for the better. Later, Darlene realizes she has to go back to her first passion … writing.
First aired: May 22, 2018.

What do you think? Are you a fan of the Roseanne TV show? Do you think the revival should have been cancelled? Were you going to watch season 11?

ABC cancels Roseanne after one season, and ABC renames Roseanne to The Conners for fall 2018.

Please please if they can bring dan back, then they can bring Roseanne back. We have lost mark, wheres jerry Garcia and andy??? This is crazy we want roseanne.

Yes it was a mistake to cancel Roseanne, I loved Roseanne the original series which millions Americans grew watching it then being able to see the other side of Roseannes children as adults and living adult problems ! It’s just plain and simple the 2 series just resonates with real life in a humorous way! It’s great to have the original cast from the original Roseanne as children and Roseanne and Dan then and now you feel so close to then and no one else will play their role like the original cast! Their like long lost family even feels… Read more »

You have made a very big mistake.. giving Roseanne the boot was really very childish on the Networks part… what was said …by Rosanne ..is exactly how you wanted her on the show… and you booted her.. So So Wrong..We tried watching the spinning off without Roseanne… terrible.. the show dont have that kick to it like Rosie gave…. Rosie said she was sorry… takes a big person to say that to the world. We miss her.. Please Bring Her BACK!!!

ABC has lost me as a viewer for its idiotic propaganda direction. It’s horrible handling of Roseanne was the final straw. I can’t even bear to watch the local news on this network.

They made a terrible knee jerk decision because they hate anyone who has different political views. Roseanne sincerely apologized multiple times, and anyone that knows anything about her knows she’s not racist! I think they did her a favor because clearly some of the cast threw her under the bus, and don’t deserve to work with her.

Roseanne was a hit coming back, the Conners, No. Very Bad Decision to Fire Roseanne. All of the SNL cast would be fired each year for doing 10 times what Roseanne ever did.
So sad that a decision like that was made because it seems it is going to cause the rest of the cast to lose their jobs and money for something irrational ABC did. And Sara Gilbert was the first to call it out, so she also is to blame for the entire cast, if this show tanks. Too bad 🙁

I could care less what Roseanne Barr tweeted. This was canceled for nothing more than political correctness. The station producing the show were cowards. I hope another station/channel pics the show up, it just as good as the first round years ago.

As much as I dislike what Roseanne did, I feel she did show remorse, and the show would be its funniest with her present – although, John Goodman and Sara Gilbert could most likely hold the show together and be hilarious! Keep the show going!

I didn’t have a chance to catch the new season. I think that Rosanne Barr showed ample amount of remorse for her controversial tweet that cancelling the show when the ratings were doing well was bad management and brash. Lots of lives (cast, crew) disrupted for a quick judgement call. What ever happened to forgiveness? If she was a repeat offender, that’s a different story…. but one tweet? Really?

I agree, I will not watch the show without Roseanne. Roseanne is the show. Forgiveness is what it’s all about.

My husband and I really loved the show Roseanne and was looking forward to the show coming back on we hope they will renew Roseanne.