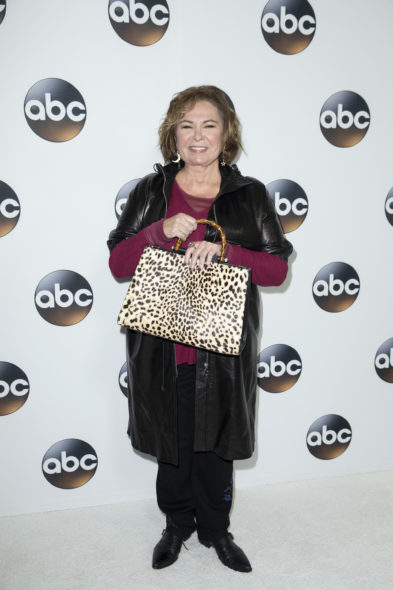 Well, that was quick. In the wake of Roseanne Barr’s racist, early morning tweet about Valerie Jarrett (former adviser to President Obama), ABC has cancelled the Roseanne TV show revival. There will be no season 11, despite the fact that it received an early renewal, in late March. ABC Entertainment President Channing Dungey released the following statement about the Roseanne cancellation: “Roseanne’s Twitter statement is abhorrent, repugnant and inconsistent with our values, and we have decided to cancel her show.” ABC Publicity posted the statement on its verified Twitter account.

Not only was the Roseanne cancellation swift, the network promptly removed all the show photography from its press site. The above image, from the 2018 Winter TCA Press Tour was one of the handful of pictures that came up in an advanced site search on Barr’s name. The only other time this reporter has seen ABC PR photos disappear that quickly, is when Mario Batali was fired from The Chew.

The show “Roseanne” was canceled Tuesday, hours after Roseanne Barr, lead actress in the rebooted sitcom, faced a public storm of criticism with a tweet calling a former presidential adviser to President Barack Obama a product of an Islamic group and a character from “Planet of the Apes.”

“Roseanne’s Twitter statement is abhorrent, repugnant and inconsistent with our values, and we have decided to cancel her show,” said Channing Dungey, the president of ABC Entertainment, in a statement.

ABC television group and ABC News are both owned by Disney.

Early Tuesday morning, Barr commented on Twitter: “Muslim Brotherhood & planet of the apes had a baby=vj.” She later deleted the tweet and apologized.

Barr was referring to Valerie Jarrett — an African American woman, lawyer and longstanding senior adviser to former President Barack Obama. Her comparison of Jarrett to an ape and the assertion that she has a connection to the organization Muslim Brotherhood, which she does not, sparked immediate anger on social media.

Barr tweeted a bit more on the subject and insisted her earlier tweet was a joke and wasn’t racist, as Islam is not a race. That claim, of course, ignores the religious bigotry, as well as the racist practice of comparing People of Color to apes, etc. 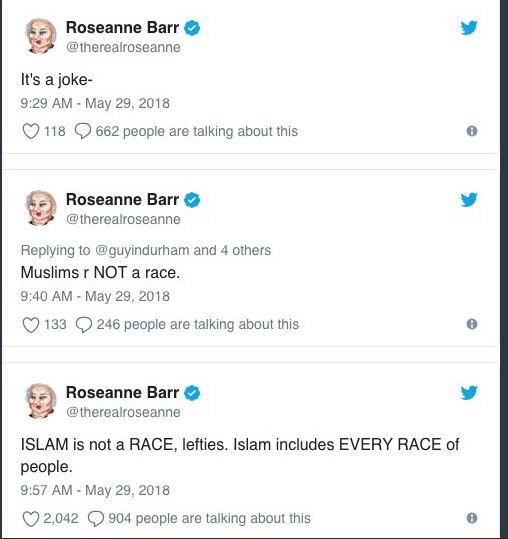 Barr later deleted those tweets and issued an apology in two tweets (one; two) that read as rather forced. [NOTE: in the following photo, the tweet on top is the newer one. The earliest “apology” only read, “I apologize. I am now leaving Twitter.”]

Wanda Sykes, who was a consulting producer on the sitcom, announced her decision to resign from the Roseanne production, after the tweet-storm, but prior to the cancellation.


I will not be returning to @RoseanneOnABC.


From Channing Dungey, President of ABC Entertainment: "Roseanne's Twitter statement is abhorrent, repugnant and inconsistent with our values, and we have decided to cancel her show."
There was only one thing to do here, and that was the right thing.

Sara Gilbert, who played original Roseanne character Darlene, and was an executive producer on the reboot, reacted both to Barr’s tweet, and to the cancellation.


Roseanne’s recent comments about Valerie Jarrett, and so much more, are abhorrent and do not reflect the beliefs of our cast and crew or anyone associated with our show. I am disappointed in her actions to say the least.


This is incredibly sad and difficult for all of us, as we’ve created a show that we believe in, are proud of, and that audiences love— one that is separate and apart from the opinions and words of one cast member.

Earlier in the day, Barr had targeted Chelsea Clinton with false intimations that the former First Daughter was married to a nephew of progressive benefactor George Soros. Clinton corrected her, directly. Barr issued an “apology” with another sideswipe at Clinton and her actual husband (and family), and then made false allegations against Soros, directly. 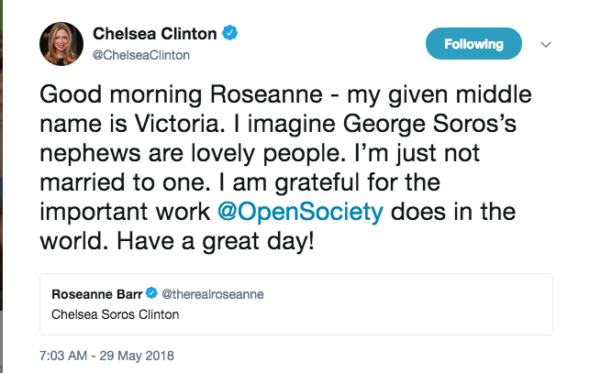 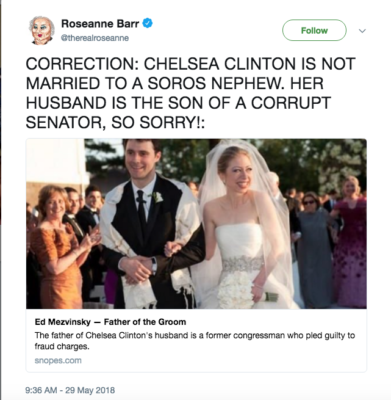 Roseanne also noted, “By the way, George Soros is a nazi who turned in his fellow Jews 2 be murdered in German concentration camps & stole their wealth-were you aware of that? But, we all make mistakes, right Chelsea?”

What do you think? Did ABC do the right thing by cancelling the Roseanne TV series revival? Let us know, below.

So, she said something wrong. Agreed. She shouldn’t have. But Don Lemonhead at CNN says TERRIBLE things about people on every single show! How does he still have a job? This also goes for about 90% of other CNN and MSNBC talking heads. Shame, really!

Soooo glad this show was cancelled. It proves there are still respectable people in Hollywood! The best thing for RB to do is go quietly into retirement, seriously doubt she can handle it though!

I was sad for everyone in that cast NOT named Roseanne. But it was her show so the whole thing had to go; they couldn’t just fire her… HOWEVER…. They managed to re-re-boot the show by re-naming it “The Connors” and killing off Roseanne’s character. So the rest of the cast could continue to make a good show and not lose their jobs because of the actions of Roseanne.

I agree that what Roseanne said was wrong. BUT, people say things about President Trump all the time. Why are their shows not cancelled? Double standard!!! I’m not proud of our Country right now…

I agree with you John. Double Standard. Most of media, comedians , all night talk show hosts make fun of our President. They take it way too far. We no longer watch talk shows or news channels except for ABC & CBS!

Hypocrites and double-standards rooted in elitist, globalist agendas. This is all about fooling the naive Sheeple into believing what “they” want them to believe.