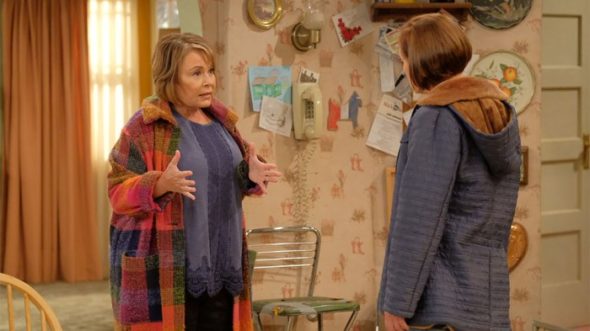 Alongside TV Land, CMT, and Paramount Network, Laff has decided to end reruns of Roseanne as well. The network released a public statement, saying:

ATLANTA (May 29, 2018) — While we believe viewers have always distinguished the personal behavior of the actress Roseanne Barr from the television character Roseanne Connor, we are disgusted by Barr’s comments this week. Therefore, we are removing the original Roseanne series from the Laff schedule for the time being, effective immediately.

What do you think? Were you a fan of the Roseanne reboot? Would you have watched season two?

Update: Hulu has now pulled the season 10 episodes of Roseanne off of the streaming service. ABC has replaced the reruns they had planned to air in primetime.

All in all, of all of the sitcoms out there, roseanne is the most unpamperrd realistic one. Unfortunately sometimes things are said, even in families, which we feel remorse for, but that’s what reality is about. Although what she said may have been derogatory, sometimes people say things they shouldn’t. Every family is dysfunctional in some way. What I think everyone loved about Rosy, is even though there were differences, everyone was loved, knew it, and was entitled to an opinion, and accepted for who they are. Many other shows aren’t realistic, they candy coat family life too much. Of… Read more »

Thank you for bringing Roseanne back on sat, i love the reruns she makes me smile, she made a mistake,she is not a racist. i am glad she is back on tvland.

The comments Roseanne made were not anywhere as disgusting as Samantha Bee’s comments. Ms Bee’s comments were almost pornographic. What decent person uses that word? Ms Bee’s program certainly should have been cancelled. It’s just another example of network political favoritism. What happened to accepting other people whether or not you agree with them? Whatever happened to what my mother used to tell me, “Just ignore them.”

Roseanne series is and has been in the past one of my favorite sitcoms. Without Roseanne Barr there is not Roseanne. She should sue the networks for using her name without her. I will not watch a spin-off about the other Connors. If Roseanne is cancelled because of repugnant comments then Cosby should be cancelled. He is a convicted serial rapist. Then The View should go. Be consistent ABC and other networks. ABC and other networks connected to ABC will not be watched anymore. My way of saying your actions are repugnant.

Cosby are cancelled and taken off. This is all stupid. Rosanne is known for her mouth. And what might come out of it. And she did apologize. They just don’t want a show that is AWESOME on the air. Love you Roseanne.

FYI Cosby show has been cancelled…..just as Roseanne should STAY canceled

I love the show – new and re-runs. I think it is a stupid decision to cancel – the character has nothing to do with the real person. Rosanne Barr has a big mouth, but I LOVE the show & ALL the characters. Why should everyone else suffer?

I would watch a second season. I enjoyed watching the old seasons on tv land. it takes me back to being a kid watching Roseanne with my mom. she loved Roseanne. I understand why they are cancelling but wish they would reconsider.

It takes upwards of one hundred people, cast, crew and writers, to put on a sitcom. And this was a good show. Rosanne’s overnight Ambien Tweets put them all out of work as collateral damage. I feel sorry for these people. What Rosanne said was awful but all the other people working on this show don’t share her twisted views and are innocents.

It does cause late night ranting – private becoming social.

I really feel bad for the rest of the cast and The Crew who up until a couple of days ago was ready to get back to work on the next season. Even though a lot of them have other jobs they will get. The other ones won’t be so lucky. Personally I think it’s a little Overkill to pull all the episodes of the show which have nothing to do with the situation. As well as the reruns of the older episodes. I mean look at Charlie Sheen whenever he was acting a fool Two and a Half Men… Read more »

Charlie Sheen have 2 things that makes him a good guy 1 he’s charismatic 2 he’s not nazi crap for rednecks. Roseanne lost on both.

I’m very upset by the outcome of this mess roseanne has caused . I love the new season of roseanne and was very excited to hear about the renewel. What she said was very hurtful and wrong but I feel it shouldn’t have Had the reprecusions . IT had . WHile an apology may not be enough, at least she did apologize. I wish in this case we could separate the person that said it from the characters she plays on the show. People say stupid things all the time we move on from it , it’s very unfortunateshe could… Read more »

I would have watched Roseanne season two and have watched reruns of the show from 20 years ago many times. Cancel “The View” too.

WHOOPI NEEDS TO BE CANCEL SHE DID ALOT WORST.THE COLOR OF ARE SKIN MAYBE I AM MAD AS HELL.

I use to like whoopi. But your right the view. Needs to be cancelled. Whoopi can sit on the show wearing a shirt with Trump on it. And he holding a gun to his head. And it says “MAKE AMERICA GREAT AGAIN”. I DON’T THINK SO. Why are they not being cancelled? And where are their apologies.
#BringRosanneBack

That’s not true. If you care about the truth, watch this. https://youtu.be/bdtOz-VFpPU

The View had already been cancelled.

Mary they are still on. Every weekday at 10:00am
They are not cancelled

I enjoyed the Roseanne reboot series but fully support ABC’s decision to cancel the show due to Roseanne’s extremely ignorant and inappropriate tweet earlier today. I feel sorry for the rest of the cast who perhaps unlike Roseanne, really appreciated another opportunity to appear on the rebooted sitcom. This is not the first time this woman has said something completely inappropriate. Hope she enjoys her macadamia nuts because her career is more than likely over!

Never was a fan of her even when the show was on years ago.