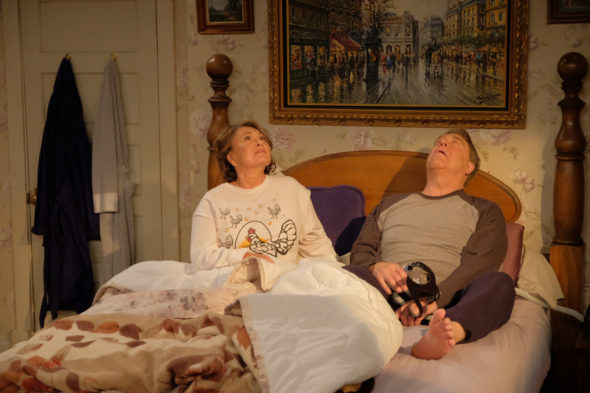 Are the Conners back to stay, or gone for good? Has the Roseanne TV show been cancelled or renewed for an 11th season on ABC? The television vulture is watching all the latest cancellation and renewal news, so this page is the place to track the status of Roseanne, season 11. Bookmark it, or subscribe for the latest updates. Remember, the television vulture is watching your shows. Are you?

The 10th season of Roseanne averaged a 3.49 rating in the 18-49 demographic and 13.48 million viewers. Find out how Roseanne stacks up against other ABC TV shows.

The revival premiered with fantastic numbers so I’m sure that ABC will renew Roseanne for season 11. I’m sure the ratings will drop as future episodes air but I don’t expect that to change anything. I’ll keep an eye on the Nielsens and update this page with breaking developments, while I seek my supper somewhere else. Subscribe for free alerts on Roseanne cancellation or renewal news.

3/30/2018 update: After just one week of the revival, Roseanne has been renewed for season 11. Details here.

What do you think? Were you glad that the Roseanne TV show had been renewed for season 11? Are you sorry that the sitcom revival has now been cancelled?

I was taught in school we came from apes..so what is the big deal, some people look like dogs ok and some look like apes ..so its ok to revolve from apes but God for bid to tell someone they look like one

I don’t give a damn what Roseanne does ot thinks on her own time I love this show and wish that my mother was still alive to see it. I want more of this show i watched growing up. For those offended seriously its not the show that tweeted and as for anything in the show thats offensive well something is always going to offend someone don’t ruin this show because as a people were not a cult cuz we’d have to be to never be offend. Look how long south Park has gone and its there intention to offend… Read more »

Exactly just look at all the crap South Park did on their show!! LOL

I think in regards to what she said compared to what other shows say on ABC than they should cancel all ABC shows to be fair….

I think they should cancelled it it,s not the same as before it,s more boring now!

Because of freedom of speech? Mayb will just have to cancel watch abc & just a boycott of the station

I will not watch any more of her show. When I want to watch good news about President Trump, I will tune in to Fox News not a comedy show. Please cancel the show!

ABC just canceled the racist. Now if it was only this easy to get rid of the other one.

So far I’m loving the revival of Roseanne. The story lines are solid, we’re seeing tons of the old cast members making appearances (and i’m sure even more next season now that it’s been renewed) as well as that unique synergy and comedy between Dan and Rosie.

Will not watch. Ever.

Hi, I’m a huge fan of the revival and have been watching reruns of the original shows. I would really appreciate it if there would be a renewal because the revival was just so fanatastic.