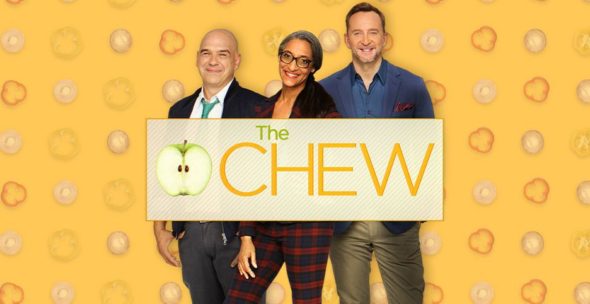 And then there were three. After a leave of absence and a review, ABC has fired Chef Mario Batali from The Chew. The daytime TV show already lost another of its original hosts — Daphne Oz — prior to the start of the current seventh season on ABC. Batali’s termination comes in the wake of sexual misconduct allegations levied against him, as reported earlier this week. The Alphabet Network does note: “…we remain unaware of any type of inappropriate behavior involving him,” on their series, in its statement (see below).

A cooking and lifestyle TV show, The Chew premiered on ABC on September 26, 2011, with Batali and Oz co-hosting with Michael Symon, Carla Hall, and Clinton Kelly. When Oz decided to leave after the sixth season, the production did not replace her. Even before this recent trouble, Batali seemed to appear less often in the past couple of seasons. The network has not yet announced whether it will replace him on a permanent basis, bring on a series of guest co-hosts, or sally forth with just Symon, Hall, and Kelly at the host table. 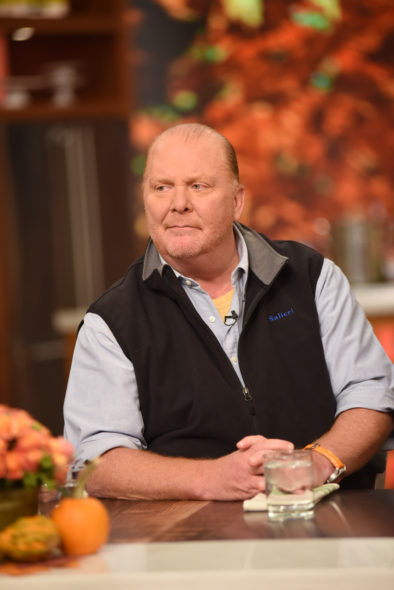 Mario Batali Fired from The Chew on ABC

Here’s the statement about Batali’s termination, which can be found on The Chew‘s official Facebook page:

Earlier this week, Batali and the network announced he would be stepping aside from The Chew for an “indefinite” period of time, while ABC reviewed the allegations against him and investigated whether any troubling behavior occurred with anyone involved with The Chew. The story originally broke in an article from The Eater, which opens with the following:

About 10 years ago, at the after-party for a wine auction in New Orleans, a woman in her 20s walked up to Mario Batali to introduce herself. As a chef, she was excited to meet one of the most revered figures in the restaurant industry. When they started talking, she recalls, she realized that he’d been drinking and he became what she characterized as “creepy” — “just giving me this provocative, icky feeling.”

Minutes into their conversation, she recalls, he told her, “Come work for me, I’ll pay you double what you’re making.” Moments later, someone bumped her glass, spilling wine all over her chest and down her scooped-neck shirt. She alleges that Batali began rubbing her breasts with his bare hands while saying something like, “Let me help you with that,” as he groped her chest. “He just went to town, and I was so shocked,” the chef says. “Jaw on the ground, I just stepped back from him in utter disgust and walked away.”

The chef is one of four women who allege that Batali touched them inappropriately in a pattern of behavior that appears to span at least two decades. Three of the women worked for Batali in some capacity during their careers. One former employee alleges that over the course of two years, he repeatedly grabbed her from behind and held her tightly against his body. Another former employee alleges that he groped her and that, in a separate incident, he compelled her to straddle him; another alleges that he grabbed her breasts at a party, though she no longer worked for him at the time. The woman whose allegations are described above has never worked for Batali, though she works in the restaurant industry.

The report goes on to say the beleaguered chef has also stepped away from operations at Batali & Bastianach Hospitality Group (B&B), which he formed in 1998 with acclaimed chef-restaurateur, and TV personality, Lidia Bastianich and her son, Joe, who is a part of the MasterChef TV show franchise on FOX. The elder Bastianich recently appeared on the November 30th episode of The Chew, entitled, “Homemade Holiday Hits,” in which she said Batali was like another son to her. When it was first announced he was stepping aside from The Chew, the Food Network put an indefinite hold on its revival of his Molto Mario TV series.

The Eater reported cited above, included this statement from Batali:

Batali did not deny all the allegations, saying that they “match up” with ways he has behaved.

“I apologize to the people I have mistreated and hurt. Although the identities of most of the individuals mentioned in these stories have not been revealed to me, much of the behavior described does, in fact, match up with ways I have acted. That behavior was wrong and there are no excuses. I take full responsibility and am deeply sorry for any pain, humiliation or discomfort I have caused to my peers, employees, customers, friends and family.

“I have work to do to try to regain the trust of those I have hurt and disappointed. For this reason, I am going to step away from day-to-day operations of my businesses. We built these restaurants so that our guests could have fun and indulge, but I took that too far in my own behavior. I won’t make that mistake again. I want any place I am associated with to feel comfortable and safe for the people who work or dine there.

“I know my actions have disappointed many people. The successes I have enjoyed are owned by everyone on my team. The failures are mine alone. To the people who have been at my side during this time — my family, my partners, my employees, my friends, my fans — I am grateful for your support and hopeful that I can regain your respect and trust. I will spend the next period of time trying to do that.”

After Batali’s earlier announcement that he was stepping away from The Chew and B&B, The New York Times reported on allegations against him, some of which reportedly took place in a private party room at The Spotted Pig restaurant.

The Chew‘s Initial Response to Misconduct Accusations Against Mario Batali

On December 12, 2017, Kelly, Hall, and Symon recorded a statement about Batali’s leave from The Chew before the determination was made to fire him. Check it out.

This is not the first allegation to shake up an ABC cooking-related TV series. Yesterday, the network pulled the third season of The Great American Baking Show from the air, after allegations against judge Johnny Iuzzini came to light.

What do you think? Are you surprised Mario Batali has been fired from The Chew TV show, or were you expecting this, when the story first broke? Who would you cast in his place? Should The Chew be cancelled or renewed for season eight? Sound off, in the comments.

The Chew was one of my favorite shows. I used to look forward to it every morning. It was uplifting and fun as well as being informative. The show was still entertaining. I have never liked GMA The chew was just as good without Mario.

I will certainly miss The Chew! Have no idea why it was canned but I think you’re wrong in doing so. I watched every day.

shame on you taking away a show that was clean fun, great food, people that cared about each other and others a show that all ages could watch and learn. we have family in 5 states that watch an then we would talk to each other an have more laughs. If you stopped becouse the other 3 wanted to stop then ok but we don’t think that’s why! do you? they did not act like they wanted to stop..

I miss Daphne Oz. I even met her doppleganger and I was going to ask the producers to fly us to the show. Daphne was one of the reasons I watched the show. The three hosts talk over each other to much. I like banter but, sometimes it gets a little silly.
Thanks for a few great years of, “The Chew”

Since Daphne and now Mario have left the show, the magic interaction of the diverse team of hosts is gone. Symon and Battali were the big guns, their joy and ability to team work great Italian recipes from Mario and Michael’s massive resumes is gone. Once my favorite daytime hour of TV, it’s now too much fill chatter, has only one heavyweight chef with mostly Greek recipes, and features extremely boring segments forcing celebrities on the daytime plug circuit to do a pathetic “whisk or stir” of something they never have never cooked or eaten just to plug their newest… Read more »

Since Batali left I’ve watched a few times… it’s gotten very silly… All they do is laugh and talk loudly and over one another.. it’s getting annoying…

I think it’s going to be the final season. There’s no excitement anymore.

They need another woman to round out the cast. Four people are enough. It hasn’t been the same since Daphne Oz left.

I hope they just keep it the 3 of them and don’t add anyone new permanently (unless Daphne decides to come back). The trio has amazing chemistry and rapport with each other, and I’d hate to see someone new come in and throw off that balance. The three of them have been handling the show just fine for awhile now anyway, and it’s been working great in my opinion. They keep it fun and light, and I love it. Guest chefs are fine, but no new permanent hosts.