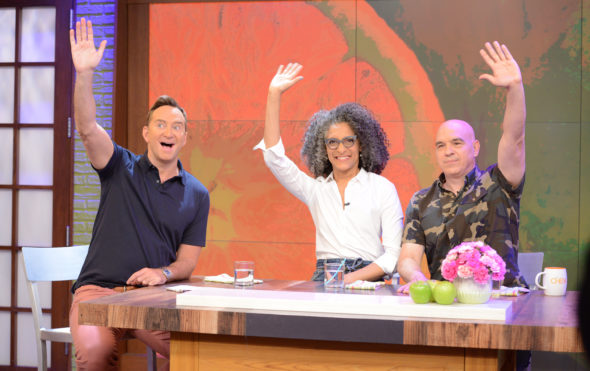 Falling Nielsen ratings, rising costs, and perhaps a side of cast upheaval, seem to have taken a lethal bite out of an established daytime delicacy. ABC has cancelled The Chew TV show after seven seasons. Instead of season eight, the Alphabet Network has ordered an additional hour of Good Morning America — in the afternoon. Reportedly, the GMA expansion will not affect Live with Kelly & Ryan, which airs at 10:00am ET.

A cooking and lifestyle TV show, The Chew premiered on ABC on September 26, 2011, with original hosts Mario Batali, Daphne Oz, Michael Symon, Carla Hall, and Clinton Kelly. When the production did not replace Oz, who left after the sixth season, fans started listening for the kitchen timer of doom.

Then, during the first half of The Chew season seven, sexual impropriety allegations involving Batali (not show-related) came to light. After a brief investigation, the formerly celebrated chef and restaurateur was officially terminated from The Chew, in December of 2017. Once again, cancellation talk bubbled up — like yeast during proofing.

Symon, Hall, and Kelly have done their level best to fill the gaps at the host table, so perhaps this show has just reached its expiration date. According to reports, The Chew will finish out its regular seventh season production schedule. As with past seasons, new episodes will air throughout the month of June, with repackaged segments taking over until September. 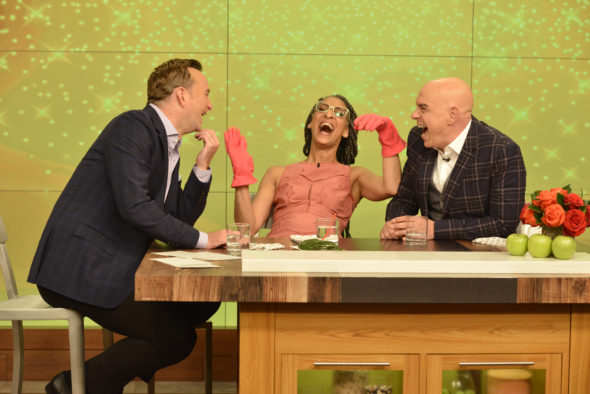 ABC News’ Good Morning America, will expand to three hours. The new third hour will air at 1 PM. EDT, noon CDT/PDT. The extra hour will replace ABC’s daytime food-themed program The Chew which, after seven seasons, 1454 episodes, multiple Emmy nominations and two Emmy Awards, will cease production at the end of this season but will continue to air as planned until September with all-new episodes airing in June.

“Over the past six years Good Morning America has solidified its place as America’s No. 1 morning show,” said Ben Sherwood, co-chairman, Disney Media Networks, and president, Disney|ABC Television. “We believe there is great opportunity for viewers and advertisers in expanding to a third hour.”

“While this is the right decision for our business, it is also bittersweet,” Sherwood added. “For seven years ‘The Chew’ has delighted audiences by delivering innovative food segments in an entertaining atmosphere. We applaud and thank Gordon Elliott, Aimee Householder, Michael Symon, Carla Hall, Clinton Kelly and the entire cast and crew for their great work and amazing run. And we wish them the very best.”

In telling his staff, executive producer and “The Chew” show creator Elliott saluted ABC’s move into a brand-new genre seven years ago. “Before ‘The Chew,’ no one had attempted a talk/food hybrid. Our hosts Clinton, Carla and Michael and the staff created television history executing the show as well as they did for all these years. I know I speak for all of the people who work on the show when I say it was the best television we have ever had the privilege to produce.”

“Good Morning America keeps finding new ways to inform and delight our audience. We recently expanded GMA through our social channels and a newly launched website. Now we will build a whole new hour of compelling content that is true to GMA;s spirit,” said James Goldston, president of ABC News.

Additional details about the program, including the title and anchors, will be announced in the coming months. 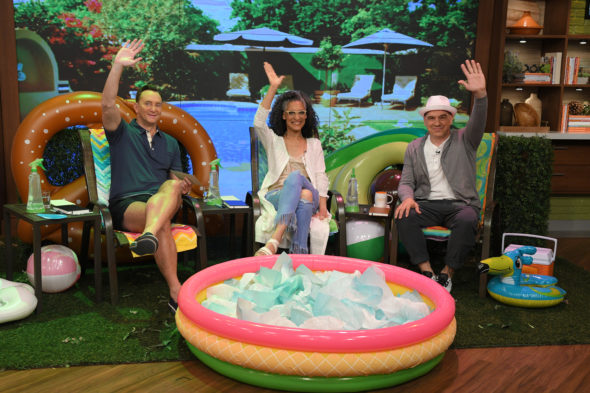 What do you think? Are you a fan of The Chew TV series? Do you think the Batali scandal and firing were the final straw, or was it time to end the show, anyhow? If it were up to you, would ABC have cancelled or renewed The Chew for an eighth season? Sound off in the comments.

6/15/18 update: The final episode airs. Should The Chew have been cancelled? Vote here.

Hate all of the talk TV. I will be watching none of it.

I am the same way of thinking chew they played with food .

Sooo disappointed… was a great “variety” type show, and who doesn’t enjoy a good, new recipe and learn cooking tips from professionals daily? I always learned something from the show. They worked well together – all of them were so likable… why couldn’t they have just brought another chef on board? but then again, I thought that the 3 of them were doing an excellent job…

I miss the chew , I am old and there is very little in life that I really enjoy , the chew made me laugh I looked forward every day to the show Clinton, Carla and Michael, you could tell they liked each other and enjoyed working together. great receipts, there is so many crap shows on tv. not that much worth watching . I’ve never been so disappointed to loose a tv program and very disappointed in the a b c net work, what is the matter with those executive’s. ??

While I may not have watched every day, if I turned on the TV at that time, The Chew was what I would tune to watch. They usually had an entertaining guest, a nice recipe to try, or just some fun chat to listen to. I enjoyed the three of them and will miss them. Who needs more of the GMA show?