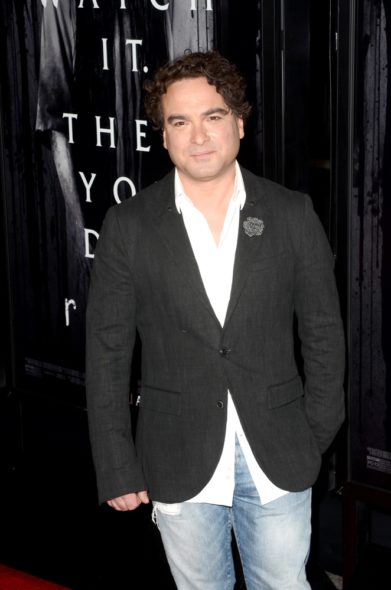 When the Roseanne TV show revival premieres on ABC with season 10 on March 27th, original cast member Johnny Galecki is returning as David Healy for just one episode. The Big Bang Theory star says he’s open to coming back, should Roseanne be renewed for season 11.

Although Galecki is executive producing the new CBS TV series, Living Biblically, he and the cast of The Big Bang Theory are reportedly starting to look at the 12th season of that sitcom as its last. Perhaps he’ll eventually have more time on his hands for additional seasons of Roseanne. Variety reports:

With regards to “Roseanne,” Galecki will appear in just one episode of the nine-episode season due to scheduling issues with his other commitments. But he is open to doing more.

“If they come back next year for another eight or nine I would love to do more than one next year,” he said.

During the Winter TCA Press Tour, Galecki also talked to TV Guide about how it felt to reunite with the Roseanne TV series cast.

Johnny Galecki will only make a short appearance in the Roseanne revival this year, but it certainly sounds like he made the most of the time he had while filming it.

Galecki was tapped to return as David for one episode, which was a little disappointing for fans who were hoping he’d be a bigger part of the series. Galecki said that filming for the revival was incredibly emotional though, and that he even got to give some input on where David would be in his life when Roseanne returned.

“[Sara Gilbert] gave all the cast members kind of full rein to contribute where they thought their characters would be 20 years later, so it was very much a team collaboration,” Galecki told TV Guide at the Television Critics Association winter press tour. “It was just one of the best weeks of my life. It was very, very emotional. It was kind of like what I would imagine going to your 20-year high school reunion was, but all the people are like still your heroes.”

As for what to expect from David’s visit to the revival, Galecki would only hint that we should expect some surprises when it comes to him as a father.

“David returns in the Roseanne revival as not the husband and father that we may have predicted he would turn out to be,” Galecki says.

What do you think? Are you looking forward to the 10th season of the Roseanne TV show? Let us know, below.

How come there is no mention of Darlemes, Husband, David, where he is, if he’s dead, or if they are divorced? She just appears, with 2 kids, with no explanation of where her husband, David, is, or what happened! I don’t like the story behind her Son dressing and he does, is stupid! Sharing they mention where he is, and in the regular show they were married, she, and he were having great jobs, after the baby Harris, got well! Also, in one of the last ,episodes, Becky, was, Pregnant, by Husband, Mark, they said to one another, after Darlene… Read more »