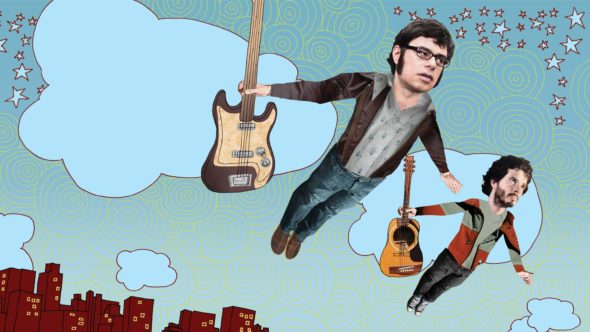 A musical comedy starring Clement and McKenzie as fictionalized versions of themselves, Flight of the Conchords also stars Rhys Darby, Kristen Schaal, and Arj Barker. The series centers on centers this two-man New Zealand band as they take their novelty folk act to New York, in search of fame and fortune.

Flight of Conchords is coming back — in one way, shape or form.

ET’s Leanne Aguilera spoke with one half of the comedy duo, Jemaine Clement, at FX‘s Television Critics Association press day on Friday, where he exclusively revealed that he and Bret McKenzie were working on a “little something” for the fans.

“We’d do something,” he replied when asked if a Flight of the Conchords reboot was in the works after the HBO series ended in 2009. “We’re going to film a little something this year.”

“We’re going to shoot an hour thing,” he added.

Clement, who shut down rumors of a Flight of the Conchords revival in 2014, played coy about whether HBO was involved in the project, and teased that he wouldn’t discuss what musical numbers he was working on. Clement and McKenzie’s first Flight of the Conchords U.K. tour in seven years kicks off in March, however, featuring all the classics from their show, as well as new material.

According to Broadcasting Cable, “HBO said the special is not yet confirmed.”

Clement currently stars as Oliver Bird in the FX TV series, Legion. Flight of the Conchords begins its UK and Ireland tour in March of this year.

What do you think? Were you a fan of the Flight of the Conchords TV series. Should HBO board the reunion special for this cancelled TV show? Let us know, below.

It wasnt cancelled in 2009, they chose not to do a third season.

I do hope it comes back on. The show was one I thoroughly enjoyed and the humour was superb.