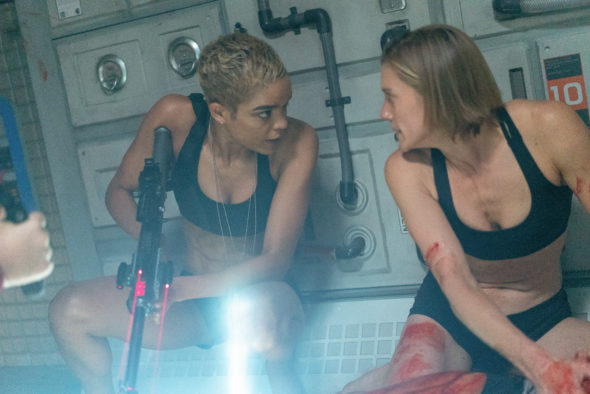 Are the Salvare and her crew doomed? Has the Another Life TV show been cancelled or renewed for a second season on Netflix? The television vulture is watching all the latest TV cancellation and renewal news, so this page is the place to track the status of Another Life, season two. Bookmark it, or subscribe for the latest updates. Remember, the television vulture is watching your shows. Are you?

Unless they decide to publicize viewership, it is difficult to predict whether Netflix will cancel or renew Another Life for season two. Sources have told us that, internally, when Netflix decides to renew, they usually do it within a month. That said, we’ve noticed the announcements can take a little bit longer. If the news is good, no news is probably not good news. Until we know either way, I’ll keep an eye on the trades and press releases and update this page with breaking developments. Subscribe for free Another Life cancellation or renewal alerts.

10/30/19 update: Netflix has renewed Another Life for a second season.

What do you think? Are you glad that the Another Life TV show has been renewed for a second season? How would you feel if Netflix had cancelled this TV series, instead?

I think the show has alot of political overtones throughout, most of which were predictable in today’s social climate, particularly in film. Despite this, and some severe scientific inaccuracies, I felt the story was interesting, although someone could say I’m a sucker for Scifi and be right. The writers do need to work on the auxiliary characters more and retool the group dynamics as things appear far too isolated for what should be a more overlapping network of stories. Also, more principle or conviction from some of the characters, they seem too childish for what ought to be a more… Read more »

I really liked it!

Can’t wait for season 2 I hope they don’t cancel it. Several of us watch this at the Dome Syracuse University.

Please renew! I want this story to continue!

I love this series! Unlike a lot of comments I think it’s original and love the strong female lead.

We thought this was a great sci fi series…. Can’t believe it got mediocre reviews and bad rotten tomatoes review