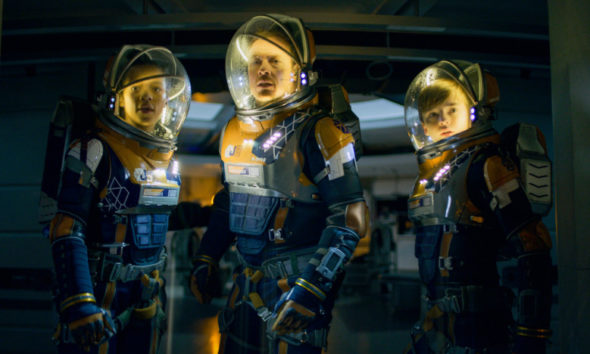 Is this remake in “Danger! Danger!”? Has the Lost in Space TV show been cancelled or renewed for a third season on Netflix? The television vulture is watching all the latest cancellation and renewal news, so this page is the place to track the status of Lost in Space, season three. Bookmark it, or subscribe for the latest updates. Remember, the television vulture is watching your shows. Are you?

Unless they decide to publicize viewership, it is difficult to predict whether Netflix will cancel or renew Lost in Space for season three. Since Netflix isn’t ad-supported, it can take a chance on series it believes in. However, sooner or later it comes down to production costs, versus viewership numbers. Lost in Space is one of their high-profile series but it’s concerning that there was a 20-month gap between seasons one and two. I’m still leaning toward a renewal but wouldn’t be surprised if it was cancelled instead. Generally speaking, Netflix TV shows which are going to be renewed are usually picked up within a month or so of a season premiere. I’ll keep my ears open and an eye out for news, and will update this page with breaking developments. Subscribe for free alerts on Lost in Space cancellation or renewal news.

3/9/20 update: Netflix has renewed Lost in Space for a third and final season.

What do you think? Are you glad that the Lost in Space TV show has been renewed for a third season? Are you sorry to hear there won’t be a fourth season?

Lost is Space the most beautiful, exciting, well written and well acted series appropriate for all family members!! Any way Netflix can continue this series!! I (and family) are heartbroken!

Yes!! We are totally enjoying this series! Thanx!

So disappointed yall cancelled after only three seasons. It’s the best show on netfix. Remember what what happen to star trek after three seasons . who makes these decisions? So wrong!!!

What can we do to ask Netflix to reconsider!