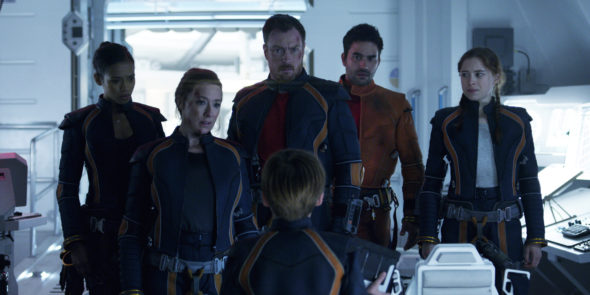 TV show description:
From Matt Sazama and Burk Sharpless, the Lost in Space TV show is a remake of the classic 1965 Irwin Allen series of the same name. The sci-fi adventure drama unfolds 30 years in the future, when space colonization is a reality.

The story centers on the Robinson family, who have been chosen to serve as colonists and hope to make a fresh start, in a better world. After their voyage veers lightyears off course, they must learn to work together, in unsafe, alien surroundings.

As a combat veteran, not to mention a father, it is a good thing that John Robinson (Stephens) has a natural ability to lead. When Jupiter 2, the Robinson’s spaceship, crashes on an unknown planet, he does his best to keep them focused. It’s not long though, before the tensions in the family bubble to the surface.

Estranged from his wife, Maureen (Parker), John is only there, because he insisted on accompanying them to keep them safe. He knows it is going to be difficult to win back their trust.

An astute, accomplished aerospace engineer, Maureen has high standards — at work and at home. She is the one who decided the family would embark on this trip to a better tomorrow.

Maureen has always believed that you can solve any problem with the proper application of brainpower and elbow grease, and she knows it’s on her to get the family off this new planet. In many ways, she feels more ready for that challenge, than she does to forgive her husband and welcome him back into the fold.

Although Judy (Russell) is Maureen’s daughter from her first marriage, John adopted her and has been the only father in her life. This medical doctor may have taken her parents’ estrangement harder than anyone, and it has affected her relationship with her dad.

As the snarky middle child, Penny (Sundwall) is blessed with a razor-sharp sense of humor and an independent streak. Still, on the inside, she’s much more of a softie than she lets on. She’s probably the least willing passenger on this journey and was upset about it, even before everything went wrong.

Where Judy is the golden child and Penny considers herself the family’s “black sheep,” young Will (Jenkins) is the baby of the bunch. Don’t be fooled by either his size or his age. He’s compassionate and understanding, beyond his years.

A sometimes solitary, sensitive soul, who has already withstood his share of bullies, Will is just beginning to recognize the courage within himself. While he wasn’t supposed to be here, he refuses to let down the family and could end up being their saving grace.

Stranded alongside the Robinsons is the rough-and-tumble blue-collar contractor, Don West (Serricchio). Even though he runs a smuggling gig for extra cash, Don is all heart. He is also, though, fairly cynical. Had they not crashed, he would have taken the next flight back to earth — with a pocket full of plenty.

Don is not like the Robinsons, and no one is more aware of that than he. To him, the idea that space colonization is the key to a more equitable society is just spin; it will never benefit ordinary people. Now though, he is going to have to ally himself with this family and may wind up surprised by them, yet.

Meanwhile, there is the enigma that is Dr. Smith (Posey), who stowed away on the Jupiter 2. She surely brings a lot of trouble with her, but is she a saboteur? One thing is for certain, she loves to play both ends against the middle and is darned good at it, too.

Finally, there is Robot, who soon devotes himself to Will Robinson, as both a helper and a friend. Robot may well be more mysterious than any human around, and boy is he big.

If they are going to survive, this troubled troupe of fellow travelers must learn to lean on each other, trust one another, and always strive toward the common good. Will they rise to the challenge? Stay tuned.

What do you think? Do you like the Lost in Space TV series? Should this Netflix TV show have been renewed for a fourth season?

This new version of Lost in Space is Great! I could not find any reason why you would want to end the series. I am sure that your talented writers could go on for another 3 to 5 seasons or more! Every time I find a really good Sci-Fi Series you end it. Why!!???!!! Keep this series going!

It’s a good show with good human drama. It should be renewed

When they 1st aired lost in space I was so excited and I loved the whole season and even went as far as buying the first season dvd. Then I found out they were canceling the series I was bummed out. My question is why?

Are you guy’s at Netflix nuts? Really are you? Lost in space is the best sci-fi show on your network. My family and I look forward to every season for the next set of episodes. The Robinson family adventures and endurance to the challenges they face, is what makes this show so popular with everyone who watches it. The writers of this show should be commended. There is an extreme amount of imagination that pulls in the viewer. Canceling this show, would be a tragedy. Please rethink for a moment. Who’s best interest is this show really serving? US the… Read more »

Please do not cancel Lost in Space after season 3. It is a great series and a show that does show the strength of family during adversity. Give the series at least a 4th season. I was so glad to see that it did not format like the original series which was campy. RECONSIDER!!!

Netflix series, Lost in Space needs to be continued for season three. It is a wonderful series reboot which has a lot of anxious followers.