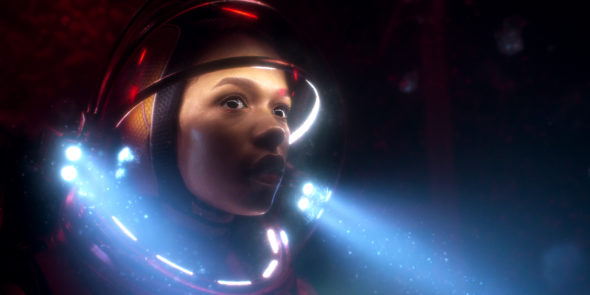 Good news, Will Robinson. Netflix has renewed the Lost in Space TV show for a second season, with a start date TBD. Season one of this reboot of the 1965 Irwin Allen classic TV series just premiered on April 13, 2018.

Learn more about the Lost in Space season two renewal from this Netflix press release.

“Lost in Space” Renewed for Season 2

ABOUT LOST IN SPACE:

Lost in Space is a Netflix Original dramatic and modern reimagining of the classic 1960’s science fiction series. Set 30 years in the future, colonization in space is now a reality, and the Robinson family is among those tested and selected to make a new life for themselves in a better world. But when the new colonists find themselves abruptly torn off course en route to their new home they must forge new alliances and work together to survive in a dangerous alien environment, lightyears from their original destination.

Deadline reports: “The pickup comes after a strong launch for the show. According to data released by Nielsen, Lost In Space garnered 3.16 million viewers overall on its first day of release, Netflix’s third best premiere-day viewership in the past year behind Season 2 of Stranger Things and movie Bright.”

What do you think? Have you watched the first season of the Lost in Space TV series reboot? Did you expect Netflix to cancel or renew this TV show for season two?

Awesome show, loved the season cliffhanger. Cannot wait to see how the Robinsons deal with the Robot Planet.

On episode 8 and enjoying it…looking forward to season 2!

Don’t make a mistake and cancel it. Robot is great and story line is cool. Pls pick up Dark Matter from those idiots at SCYFI.

I’m glad and happily surprised that Lost In Space was renewed for a second season. Its disappointing they are waiting so long to shoot it. People “seem” to age rapidly on TV shows, and because of that perception the ones that have long times between shoots usually fail. Continuity is lost, and the viewer feels like they are dealing with near strangers when the show finally is broadcast. Successful television in the past had 22 or more episodes per season. Then it went to 13, then 10 and 8 and I’ve seen British TV shows as low as 6 episodes… Read more »

I absolutely love the first season of Lost in Space and can’t wait to see season two. Every character is amazing and the story is unique!!!!!!